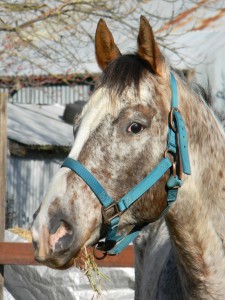 Recently, Coffee was on some turnout time in the arena. My mother went to bring him in, and he was watching calmly from the corner; but, when she neared the gate, he galloped a small circle, threw in a buck, and stood looking at her expectantly. He was clearly asking, “Come play with me?” So, she ducked under the fence, and off Coffee sped! At last – a playmate had arrived!

I have heard from horsemen of all stripes that you should never play with your horse. For the “Natural Horsemanship” set, it is tantamount to suicide – your horse will “kill you” if you don’t control the situation! Of course, some have also dubbed their “exercises” as “games” so the human think it is fun – but it is not necessarily fun for the horse. How much fun does “run around in a circle until I tell you to stop” sound to you? Still, it is quite possible to play safely with your horse, without alarming them (another concern I hear often) – and decades of invitations from my horses to play with them have proven to me that they enjoy it!

Horses are playful creatures. Like people or dogs, some retain their youthful playfulness into adulthood; others, less so. Not all horses play the same, and watching their personal styles can be amusing. Java, Noble, and Ricky all enjoyed the faux stallion fight style. Coffee is that rotten kid on the playground who comes up and punches you in the arm just so you’ll chase him. For the most part, the mares have preferred running, with Roxie having a particular interest in throwing in some acrobatic bucking. Dani, as a yearling, so annoyed her pasture mates (she would actually stand on them when they laid down to nap) that the two fillies she lived with would take shifts in chasing her around!

Whenever possible, we’ve given our horses the opportunity to play with others. However, circumstances – hind shoes, lack of proper facilities, or incompatibility between horses – often have prevented that. So, I became a substitute playmate. All of our horses have enjoyed playtime with us, and I believe it has added to our bonding. However, safety for all participants is a concern, so there are few rules:

What games do we play? Well, there is “dodge ’em” – one of Ben’s favorite games, but not one I’d engage in with most horses. It amounts a game of chicken, where one of us ran at the other, until that player would dodge away at the last minute. We took turns in the roles, we had complete trust in each other, and I was much more nimble then. Those games are cherished memories, but not something I’m likely to ever repeat.

In a similar vein, but safer, is “Boo!” This is one of Coffee’s favorite games, but also one Nash learned to enjoy, and Roxie is now getting into. The horse comes prancing up, sometimes sideways, and at a key moment the human says “Boo!” which inevitably results in a spin and bolting away. Coffee has a custom move that is used almost exclusively when playing “Boo!” – he does a 360 revolution in two to three buck-jumps. I just love this maneuver, but I’m usually too busy playing to catch it in video. Someday …

We’ve played “I’m gonna get you!” which bears some resemblance to playing a chasing game with a toddler. We’ve played shadow games, where I start prancing and the horse begins to prance along (at a safe distance, of course). We’ve also played “follow the leader”, which should always be a slow-speed game. I’ll never forget watching a video of a young woman playing this type of game with her horse at a run, and having so much fun until the horse kicked her in the head!

Perhaps your horse is turned out with his best buddies, and doesn’t need any play time. However, play is a key social engagement that certainly can aid bonding. It can take many forms – my mother plays games with Noble by teaching him to offer named body parts, and he invites her to play frequently. So, if you haven’t already, see if you can come up with some “horseplay” you and your equine buddy can enjoy together.

Be good to your horses … and have a little fun!