In this era of learning everything by YouTube video or Facebook posts, people seem to rarely have the patience to spend time learning anything in depth.  I have read many an article that says we no longer need experts because we have so much knowledge at our finger tips.  I hope those authors never need medical, dental, or veterinary services.

Unfortunately, the equestrian world has been infected with this idea.  We live in an age of ‘lesson by clinic’, in which many people receive their instruction over an hour or two, several times a year.  That trend had begun when I left the industry, and seems ingrained in at least certain areas even more now.  Then there are those who post questions on Facebook that seem to be seeking free instruction from an online community.  This not only short changes their own education, but poses a host of potential risks to the safety of them and their horses (some of the answers I’ve seen are frightening!).  The quote below was written twenty five years ago, but is more important to understand now than ever!

“As in all arts, the equestrian art must be based on apprenticeship.  It cannot be assimilated by ‘shopping around’ for ideas and inspirations.  Even a discriminating mind, a discerning perception, depends on properly grounded knowledge; ignorance causes gullibility. …

Apprenticeship may be unattractive.  It takes much time and effort; it reeks of subservience.  As with anything that needs discipline, as horsemanship does, and as with anything that has to do with exacting learning as riding does, the terrible burden of acknowledging ignorance is asked of the pupil.  In an age of instant fixing, superficial expertise, and misinterpreted egalitarianism, the horror of having to accept a master who knows more, who must demand, who will supervise, and who has the right to punish, is virtually unacceptable to the arrogant and the presumptuous.  But it is precisely these people who should be discouraged and weeded out by the apprenticeship system, leaving available space for those who are truly dedicated and willing to sacrifice, those who have the predisposition and the personality to carry on the equestrian tradition. 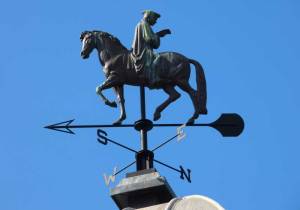 Equestrian knowledge is not transferable only through books.  One rides not by recipes, but by coaching and monitoring.  The nature of the art makes it more dependent on apprenticeship than nearly any other, except perhaps dancing.

‘If you wish to reach the highest, begin at the lowest.’  This ancient principle is the most important one for an equestrian to remember.  Apprenticeship requires the humility to being as the lowest.”

I was not so lucky as to have an apprenticeship in the classic sense.  There were no large stables close enough, and we did not have the money to have me travel east.  My journey to becoming an equestrian was therefore much longer than many I know.  When I did finally find a mentor, he was still too far to have the type of apprenticeship Mr. De Kunffy is referring to.  But, in spite of the distance, my lack of money, and the pair of us being rather unconventional, he took me on.  When I could travel there (for a few years that was monthly), I would do everything from grooming to riding green horses.  What I learned in the hours spent watching other lessons, discussing competitions we were watching, and just philosophizing about horsemanship, could never be replaced by books, videos, or Facebook posts.

But, not all instructors are worthy of apprenticing with.  In my next post, I will share my criteria for determining if an instructor really fits mentor status.