My horses, my teachers: Delight

One reason I started this blog was to tell the stories of the horses in my life.  As I work with each of our current herd, I think back on those that have come before, and what they taught me.  Without their “lessons” I would not have the tools I need to deal with my current challenges.  So, I’ve decided to use this blog as a way to honor their memories as well.  It is a bit cliche, but the saying is that the best riding teacher is the horse – which is very true, if you are an attentive student.  I have certainly learned something from every horse I’ve ever worked with.  So, with all apologies to Colonel Podhajsky for stealing his title, I begin this new series with the story of my “first love”, as my mother calls her.

I was ten when Delight came into my life.  I had been riding for two years, and taking lessons for a bit more than a year.  Shortly after we moved to the area, my mother and I started renting horses at the recreational riding center at our local university.  After enjoying that for a while, we started taking group lessons.  The horses at the center were all donations – some no longer sound for their prior occupation, but many were race horses who didn’t measure up.  Delight was one of a donated group of thoroughbred mares that weren’t fast enough for the track, and not blue blooded enough for the breeding shed.

I was there the day Delight and the others arrived.  By that time I was earning my lessons through volunteering on the weekends, cleaning stalls and helping escort trail rides.  The mares were barely off the trailer when two of the male instructors, visiting students from Argentina, were tacking them up to try them out.  Delight’s issues were apparent on that first day: she pulled back at any sudden movement, and when mounted nearly dropped to the ground.  The two Argentinians dismissed her, and selected the two prettier bay mares as their projects.  My instructor, Connie, would take on Delight.

Although the horses were there for rentals and lessons, the instructors were allowed to select a favorite to have as a project and even show.  That seemed the path for Delight, so I was taken by surprise several weeks later, when Connie asked if I wanted to ride her in one of my lessons.  The mare was still very green, so to this day I can’t be sure why she made that offer.  But she told my mom that I had such quiet soft hands and legs that she was sure it would work.

In the couple of months that Delight had been there, two things remained constant – she still pulled back when tied, and she still dropped her back violently when mounted.  I had observed attempts to fix both things, and they always left me feeling unsettled. Sacking out was a frequent occurrence – in the old fashioned “cowboy” way of flooding the horse with flapping objects.  One attempt even involved running the rope through her halter, around her belly, then around her butt, then back through the halter.  Essentially, every time she pulled back, she’d squeeze herself.  One of these “pully” session lasted until the mare was on the ground and they thought she literally might be dying.  Not surprisingly, none of that cured the pulling back.

I don’t know why, as a child, I was the only one to see it … but that mare was terrified … of everything.  Perhaps it was the very innocence of a child that made me the right match for her – skill-wise, I certainly wasn’t – but Delight and I clicked from that first day I rode her.  To begin with, her pulling back had scared me so much, that I “cheated” and didn’t tie her.  I wrapped the rope several times around the tie rail.  She was ticklish to groom, so I just brushed her (no curry comb).  When I went to put the saddle blanket on, a classic moment for her to pull back, she started back – but she felt no resistance since the rope slipped.  I talked soothingly to her, brought her back forward, re-wrapped the rope and saddled her up.

The next challenge would be mounting – and here I “cheated” too.  I’ve never been a springy person, and I’d always hated trying to drag myself up on some of those horses (I was still little, after all).  With no ego at stake, I was more than happy to use the stump that served as a mounting block for neophyte renters.  Problem solved!  Without the drag on her back, she was able to stand up to my mounting without sinking in her back.

That first ride was somewhat tentative – I was still learning, and she was green.  But I fell in love immediately.  She was sweet and kind, just scared and misunderstood.  In school, I was always the misfit – so connecting with a being who needed me was irresistible.  And so, for the first time, I experienced that magical bond that I’d read about in all those childhood horse stories.  Delight became “my” horse – it wasn’t hard, because no one else was really interested in her. 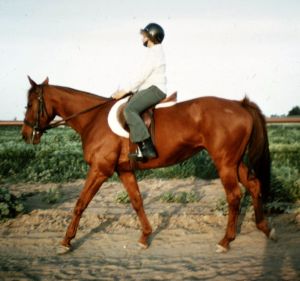 The only picture of Delight I could find, not long before our horse show debut.

It was on Delight that I rode in my first horse show.  Our university has an annual spring festival, and in those days a horse show and rodeo were big parts of the celebration.  Chalk it up to naivete, but I fell for the suggestion that I should take an off the track Thoroughbred to a horse show in less than a year of riding together.  But I did.  It was about a half-mile ride to the show ring, and one of our friends from the barn walked with me.  All went well until we approached the crowds and ring – I was suddenly in my own “Ho-ho Silver!” moment!  Maybe that should have been a warning, but I’d committed and we were there, so into the ring we went.

Delight was terribly nervous – I could feel every fiber of muscle vibrating underneath me.  I spent the entire class just calming her, and we were doing okay until the canter.  The memories of the track were too great, and I ended up circling in each time.  It was a rough way to experience your first show – but I was so proud of her!  It’s hard to explain, but as badly as it seemed from the outside, I knew very well that we’d only survived because she trusted me – as terrified as she was.  I later heard, from an adult friend at ringside, that some fellow in the audience had been going on about how I clearly didn’t belong there and didn’t know how to ride.  She turned on him and said “If that girl didn’t know how to ride that horse, they would have been through the fence and across the county by now!”  I knew she was right – but I credited Delight’s trust rather than my own skill.

Over the nearly two years we were together, Delight eventually stabilized enough that she could be sent out on trail rides or into lessons, with skilled riders.  I was proud of her for that, too.  But she was still my girl – I could call, and she’d coming running.  If this were one of my childhood stories, then we grew up together and lived happily ever after.  Sadly, I cannot honestly write that ending.

Delight’s flatwork was good, but she never learned to like jumping.  If she’d been for sale, we might have bought her and I probably would have been a pleasure rider.  But the Center’s horses could only be sold through auction (some guard against the volunteers getting themselves a bargain horse, I think), and they only went to auction if they were no longer useful.  I was also outgrowing the lesson program, so I started riding at a private stable.  Eventing was what I really wanted to do, so we went shopping – and my new instructor eventually found us Wicki.

I never forgot Delight, and I would occasionally visit.  On my last visit, it had been a few months since I’d seen her – but she came when I called, as always.  She was dead lame in one front foot – likely an abscess.  While I was there, friends told me that she had started her old habits of pulling back and falling when mounted from the ground.  In my absence, she’d destabilized, and the head of the program was sending her to auction – the very next day!  I was devastated!  I tried to argue with the woman to at least let her get over the abscess.  I would ride her at a future auction to let them see what she could do!  But I got no concession from her.

Our local auction was well known for the “killer buyers” who attended.  In those days, horse slaughter was a booming business in this country, and in our state.  The only other attendees tended to be ranchers, and the odd person who knew that a horse they wanted would be at the auction.  I knew, even at that age, the likelihood of a dead lame thoroughbred mare finding a good home through that auction.  Her likely fate was tearing me up, but Wicki was stretching our already thin budget, so asking to buy her was out of the question.

To this day, I get misty thinking about Delight and the guilt I still feel about abandoning her (in writing the last two paragraphs I’ve gone through four tissues).  I was only thirteen, with no control or money – I had no options, so perhaps I should feel no guilt.  But she  put her trust and friendship in me, and I left her behind.  My guilt over Delight has influenced every “buy or keep” decision I’ve made since.

It is because of Delight that I always look for a reason behind any misbehavior, giving the benefit of the doubt to pain or fear as the cause.  She cultivated my empathy for non-humans, making me realize at an early age that they have emotions and sensitivities.  That was not something I would learn from other people, since in those days it was widely accepted that animals acted only from instinct. But, as a child, I saw in her the pain and fear the adults missed, or chose to ignore. Finally, Delight was the first who taught me the beauty of gaining a horse’s trust and friendship – and the emotional responsibility that goes with it.  She will always be my first love.

1 Response to My horses, my teachers: Delight