A quiet moment between “games”.

It was a mostly lovely holiday weekend.  I say “mostly” because every Fourth of July brings threats of fire in a very hot dry county where any yokel can (and does) buy fireworks.  I have nothing against people having fun – but there has to be some sense used when you’re surrounded by dry brush.  Sense is generally in short supply, and the day is always filled with the sound of sirens.  This year was no different, with pillars of black smoke rising too close to home!  But, we survived another year – and the rest of the weekend was quite lovely!  I took the opportunity to extend the three-day weekend into four, and capped it all off by playing with my baby boy!

I started the weekend by making an ill-advised decision – I took Noble to the arena, and forgot to give Coffee a snack.  As I was opening the gate, a plaintive whinny poured across the barnyard.  Noble’s head flew up.  He answered Coffee, and in the next instant he was gone!  I had no chance to hang on to him.  So, I followed him into the barn and found him consoling Coffee.  Of course, Coffee was less concerned about Noble’s absence than he was about his missing snack.  I learned two lessons – make sure Noble has his turnout time before trying to work with him; and make sure Coffee has his snacks!  Tonight … check and check! 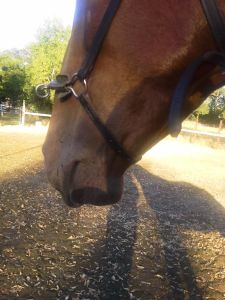 Awaiting my next request.

I’ve been doing some basic liberty work with Noble on the weekends. Tonight I followed the usual pattern, and inserted a few extra elements.  I started by introducing him to the buggy whip.  I’ve done work with using the lunge line as a forward signal, while he was at liberty – but I haven’t had the whip in hand.  First up, get used to the touch of it – no big deal, until I got to his back legs.  A little stomping, to no effect, and he tolerated the touch of the whip there, too.

Next up, learning to move from the touch of the whip.  For this, I let him be at liberty.  During our play sessions, I let him wander as he wants.  After brief intervals, I ask him to move – just teaching basic body language and voice signals.  Today I incorporated light taps of the whip.  At first, the weed was more interesting than I, and the tap an ignorable nuisance.  But each time he’d move off, the annoyance was gone.  It took my boy-genius very few repetitions before a cluck and just raising the whip gave a result.  As in most sessions, he typically does a semi-circle before turning in for his treat.

Instead of “follow the leader” maybe I should call it the “shadow game”?

A little follow the leader – walking, turning, stopping, backing up and trotting.  It was now time for another new twist.  I’ve been working him in hand, walk and trot, and occasionally stepping a bit farther away from him.  So, tonight, we made our first go at trotting a circle on the line.  Walking on a turn, I asked him to trot, then let out the line and pointed the whip to direct him around.  Piece of cake!  No pulling, no stalling … just a lovely easy trot in a lovely circle!  A nice way to redeem his bolting incident earlier in the weekend.

My mother has been pestering me that Noble needs to learn to lunge, now that he’s two – at which I usually just smile and nod.  Tonight she got to see that my random playing is not quite so random after all!

This entry was posted in My Journey and tagged Coffee, fireworks, follow the leader, Fourth of July, learning to lunge, liberty work, Noble, play time. Bookmark the permalink.