I used to love winter.  Admittedly, I’ve never lived anywhere with snow to shovel, or ice to break in water troughs daily.  Winter for me has always been gray days, fog and rain.  Spending my early childhood in the region around Seattle, this was winter and I loved it even well into adulthood.  Of course, that was when I had an indoor arena to use and my horses had 24 hour access to the outdoors.  A smaller property and lack of facilities has changed my perspective.  Winters have become days of darkness, when the horses and I all end up bouncing off the walls and getting rather annoyed with each other.  This winter seemed on track to be one of the worst yet – and we’re technically not even a month into it!

When you have a small property, it takes little to destroy the ground during wet weather.  Most years we try to balance letting everyone have outside time with not destroying the land.  In the last several years that has been relatively easy, as California has been in a drought.  It rarely got wet enough to keep everyone locked in for more than a day or two at a stretch.  With a slightly more “normal” rainfall this year, it is already the wettest winter in Noble’s young life – and he’s not taking well to it!  After just a few days in, through some rain storms, he was busting to get out – and bust he did!  After a couple of failed attempts to get him to the turnouts, with him breaking away numerous times between the barn and the back, it was clear that this was going to be a rough winter!

As I watched my colt bolt away, for the twentieth time in three days, I had to question the practicality of raising him here.  When we bought this property it was never with the idea that we would be raising any young horses.  At that time, all we had were adults and I had no interest in breeding any more.  When we did have Tally, the back field was open and I had an older mare for her to be turned out with.  I questioned my situation then, knowing that the ideal is multiple acres with like-aged young horses to play with.  But I don’t live in an area where that sort of facility is readily available, so we made due.

The back is now partially taken up with turnouts, and the perimeter fence has taken a beating from fallen trees and time.  It’s far from an ideal place for a youngster to grow up.  Yet, he was clearly telling me that what he needed was space to run and a way to burn off some energy.  So we started a program of days out with “Uncle” Java.  The first couple of times were enough to make me wince and cover my eyes, as they careened around oblivious to the mucky hazards in the ground.  But by today, the third day out, all is much more matter of fact.  The change in Noble’s overall temperament is dramatic, so we’ll just hope that Mother Nature is kind enough to not flood the back field.  Ruts I can always fix in the Spring.

With those two occupying the back, turnout for the other three adults is limited.  Worry not!  They are getting nice walks and hand grazing.  Our arena, being virtually concrete these days, is usable in all but the most flooded conditions.  Yesterday, Coffee took full advantage of the great traction, and put on quite a show!

Still there will be too much time spent in the barn, and the barn always suffers for it.  A recent clip shared on Facebook provided a fascinating approach to the problem of environmental enrichment, even in a barn.  In it a behaviorist suggests bringing in branches, and even painting them with pureed herbs.  I’d read recent articles by nutritionists stating that domestic horses are missing some of the browsing that makes up the wild diet – a touch of bush or tree along the way.  So, this seemed to address two concerns in one.

During chores this morning I found that one of our maple trees dropped some branches in a recent wind.  Keen to try the new idea, I rigged the largest limb up against Coffee’s stall.  Instant hit! 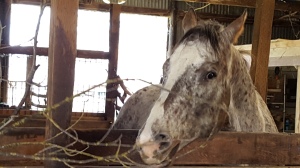 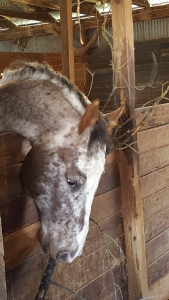 Throughout the morning, he would spend time breaking small twigs, nibbling bark, and shaking the branch around.  I’ll be trying branches in everyone’s stalls now!

The sun is shining, as I write this, proving that winter is not just about darkness after all.  Now that we have everyone else’s needs met, maybe I’ll actually survive this winter after all.