I was thirteen.  I’d just gotten my own horse, and was embarking on the path to competing in three-day eventing.  A group of adults I’d ridden with for a few years invited me to go and watch one of the few large events in our state.  Aside from loving the sport, I was excited to go because a recent Olympic Dressage medalist had been invited to judge the Dressage for the upper levels.  It was rumored that she would have her Olympic mount with her – meeting him being more significant to me than meeting her. 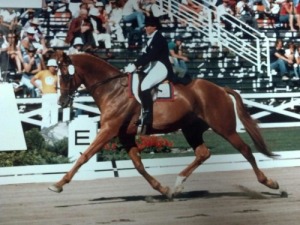 The rider I was not “allowed” to criticize.

The first day there, before competition began, the press was in full force and a riding demo was done for their benefit.  As I watched, I was struck by how much movement the rider was making on top of her horse.  Flying changes entailed significant upper body flinging and boot heels flying.  Piaffe and Passage were distracting for the amount of “wiggling” the rider put in.  Even when sitting relatively quietly, the rider was hunched and rigid.  Naively, I turned to one of my adult friends and asked why the rider’s legs were so busy and her back so hunched. “When you can ride Olympic level Dressage, then you’ll have a right to ask that question!” was the reply I received.  This was a puzzling answer from someone who had pestered me to keep my “head up and heels down” – but it was my first experience with the notion that you are not allowed to criticize anything that you cannot do better.  Even at thirteen, I found that a silly notion!

It’s all over the internet, these days.  If you have not ridden at the top level in [fill in the equestrian sport] then you have no right to criticize those at the top of the sport.  Newsflash: many people get to the top of their equestrian sport through natural talent and amazing good luck.  Neither of these require a significant amount of knowledge or study.  I am not knocking those riders – if they are good enough to earn the accolades, more power to them.  However, do not then make the leap that they have a high level of knowledge or are the teachers you should seek.  The most famous Dressage rider in the world today was quoted last year, at her first U.S. clinic, as saying that she does not really know how she does what she does.  And, let’s be honest – she did not train the horse she has been so successful on.  She was lucky enough to be taken on by a top trainer, and to have him give her the ride on one of his best horses – but he was there every step of the way.

I have met many a top rider who can ride anything you put them on – but cannot explain anything they do.  Nor can they tell you whether another rider’s horse is correct, or how it might be “incorrect” in how it is going.  It is not the talent to do a sport that makes you an expert – and by extension, you don’t have to be at that level of talent to study a sport and become an expert.  George Morris frequently states that he did not have a natural talent.  Although he was successful, he says that it was through working and studying much harder than the “natural” riders that he got there.  It was this, and not any “natural talent”, that has led to his being one of the most influential hunter/jumper/equitation coaches in U.S. history.

The silliness of not being able to judge those you cannot equal in performance is obvious if you look at other occupations.  Take, for example, actors and directors.  The most famous directors, of either stage or screen, have rarely been actors – and when they were, it’s even rarer that they were any good at it.  So, how can those directors possibly judge the quality of the acting?  What right do they have to tell the actor that something might not have “worked”?  Let me start with the fact that an observer will always pick up on things that the performer/athlete will not realize – because we cannot see ourselves perform.  Coaches, trainers, directors … they all exist for a reason! 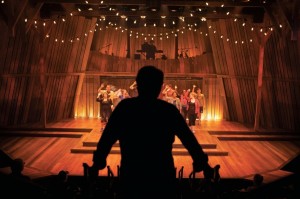 The director taking in the whole scene.

Aside from a different perspective, directors also have made a study (whether formally or otherwise) of staging, blocking, interpretation and all of the other elements that go into making a play or film successful.  Actors focus on their performance – the director looks at the “whole picture”.  Can a talented actor make the leap to talented director?  Of course – it happens.  But that actor has to put aside what they know as a performer and learn a new set of skills and a new perspective – just as a rider has to do in order to be a successful coach or judge.

I will be the first to grant that there are many “weekend quarterbacks” on the internet, ready and willing to comment on things they don’t fully understand.  But that does not negate the fact that there are many who have studied their favorite sport in great depth, in spite of the lack of talent (theirs or a horse) or opportunity to reach the level of those they are commenting on.  In fact, I hold that it is through the ensuing dialog that learning happens – but only if we keep an open mind, welcome other perspectives, and then use observation to measure the truth in what was discussed.

Whatever your level and whatever your success, you should always be open to new ideas and new perspectives. Dismissing the possibility of someone contributing simply because they have not competed at the highest levels stops the learning on both sides of the discussion.  The answer my adult friend should have given me was: “Not all top riders have perfect form, but what works for them may not work for you.  It’s always best to start with solid basics and build from there.”  That would have turned a “forbidden topic” into a teaching moment.

Be good to your horses … and your fellow internet travelers!