I have not been in the saddle for over six months. One of the longest rainy seasons on record, followed by horse injuries, then my own, have created a formula for stagnation on the horse training front. It’s a formula that has repeated many times over the last six years, as I’ve struggled to return to serious riding. At times it can feel like some cosmic message that perhaps my riding days are in the past. I will admit that I have considered heeding that message many times, over those years. Yet, this year is somehow different. I am certainly frustrated at the issues we’ve been dealing with – but I’m no longer haunted by the doubts that have plagued me in previous years. This time it really just feels like an large blip in the chart of progress.

Last year seemed to finally be a breakthrough, as I was able to ride regularly and make real progress in Coffee’s development. It was the clearest reminder of what is possible, since I lost Nash as a partner in 2016. Perhaps that was enough of a boost to carry me through this year. Or maybe the new job, with its lower stress and greater flexibility, has given me the equilibrium to keep the setback in proper perspective. Whatever the cause, frustration has not gotten in the way of enjoying time with the horses, and the bits of progress that have been made.

At this point, I began to write a full update of what’s happened this year – but it soon became too lengthy and bleak. So, in the spirit of the optimistic attitude I’ve kept throughout, I will simply relate the limited areas of progress that have been made.

Tally – Amazingly, after such a long winter, Tally came back having remembered the balance and carriage she’d obtained last year – unfit, yes, but balanced and upright.  A huge step for her, since leaning had become a habit during her time at the trainer. She has also been at her most placid this year. The neighbors have been banging and clanging about, with the mounds of junk they’ve collected – but her reaction has never been more than a twitch of the ear. For the mare whose hyper-sensitivity once made her dangerous, this is an amazing transformation! If we can only both get fit, I hope to be riding her before winter.

Roxie – Poor girl, her progress has mostly been to get back to normal. Last year we pulled her shoes, in an effort to regain a more normal roundness from the narrow constricted feet with which she came. That effort has been successful – but she spent the ensuing year mostly sore footed. Unfortunately, my stout little girl has also inherited the tiny feet of the Quarter Horse halter breeding. The combination of a massive body on tiny legs and hooves resulted in flattened heels that would not come up,

regardless of what we tried with trimming, diet, environment, etc. By this spring, she was pretty chronically lame.

At the last farrier visit, we decided to put shoes back on, to see if that would help. My farrier happened to have a pair of PLR natural balance horse shoes, so we decided to experiment. The results have been amazing! After one week, she was short, but not lame. After three weeks, only I would have known that her stride was a fraction shorter than normal – and she’s only gotten better from there! I can hear all of the lectures from the ‘always bare’ crowd now – but sometimes genetics are actually stacked against you. And sometimes shoes actually are the answer!

Noble – On some levels, his progress has been the most notable. Whenever physically possible, I have gotten him out and worked on his education. From a ‘what he knows’ standpoint, progress has been slow, but his interest in learning is growing. He has also remembered many things that seemed to have been lost during his juvenile rage, like basic lunging. He has become actually peaceful to be around – my mother now dubbing him a ‘gentle giant’. However, the most notable progress has been in his desire to work with me, and his trust when something happens.

I cannot enter the barn without Noble soliciting my attention. If I take other horses out, he will be fine with the first one, but have a temper tantrum if he’s not at least number two. On one occasion, I’d thrown snacks and was preparing to take Roxie out – he was so insistent that I pay attention to him, ‘talking’ incessantly and having no interest in the food, that I had to give in.

He is now focused much of the time when we work. There have only been two break-away incidents this year – one when I was caught off-guard, and one when I knew I was in a bad position and just let go. The rest of the time, if he’s spooked, he stops at the end of the rope – or, better yet, will turn and look at me for a cue. Going from the “I’m out of here!” juvenile, to the “What should I do now, mom?” fellow he is now has been an amazing, and humbling, transformation to watch.  I begin to believe that anything is possible for us. 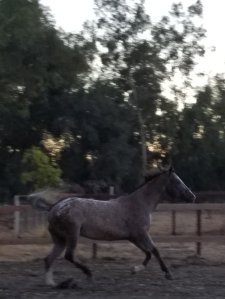 Poor Coffee is the one who has not made any progress this year, generally down to my injured leg (pulled Achilles tendon) and now recovery from oral surgery. As I write this, I’m on day ten of what is likely to be a month-long stay from riding. I’m hoping I’ll soon get the green light to at least do groundwork, as I’m getting itchy to do more than pet noses and scratch withers over a stall door. Just before the surgery, we had the arena sprinklers updated and I finally got the arena recovered from it’s post-winter cement-like state. So, everything is good to go but me!

But, at least I’m still here. As a colleague is fond of saying, “It beats the alternative!”  Through all the frustration of the horse downtime, we’ve made progress on our place, and I’ve reconnected with growing food for our table. So, in the immortal words of Stephen Sondheim, “Three cheers and, dammit, c’est la vie!” For those not familiar with the reference, please enjoy this version of “I’m Still Here” by Carol Burnett, whose rendition has never been topped in my estimation.  Cheers!