Coffee in his ‘roll up’ fly sheet look.

I have a creative little herd.  They like to rearrange and reconstruct things just for fun.  Often that includes the ‘clothing’ they wear.  This tendency is not limited to just one – no, it has become a trend within the group.  So, just for fun, while I work to finish some other posts, I thought I would share some of their best fashion statements.

Coffee was the first horse we’ve had who showed creativity in how he wore his attire.  I was not able to find any photos of his early fly mask efforts, but I do have the recent photo (above) of the day he clearly decided that his little behind was too cute to hide under a fly sheet. 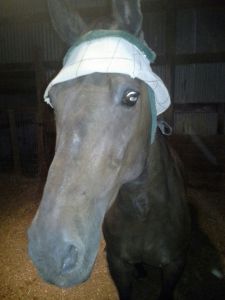 Java was the first one I caught on “film” with his attempts at fashion.  This was one of his first efforts, a rather sporty look, reminiscent of a tennis visor or Eighties headband.  More recently, Roxie revived the 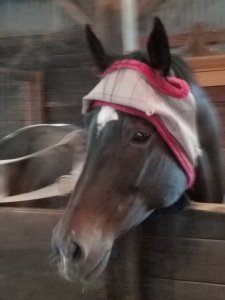 look.  She added the extra detail of showing the faux fur trim above the eye.  So, in the tradition of popular entertainment magazines, who wore it best? 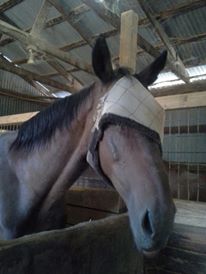 Java’s other notable attempt was this rakish one ear look.  The diagonal lines are very flattering on his angular face.

Tally made her own attempt at the look, with perhaps a bit less success.  She’s made the rookie mistake of dropping the angle too low, losing the rakish “peek a boo” aspect of Java’s look.

By far, our biggest fashionista is Roxie.  For her the fly mask is far too mundane for one as colorful as her.  Here is just a sampling of her best looks.

The cowl neck, for those nippy fall evenings. 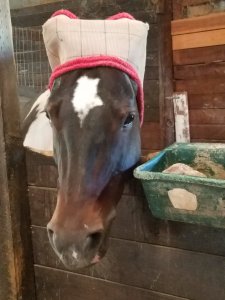 She calls this one The Cardinal

She calls this one Retro Nurse – my personal favorite!

But, for all of her fashion talent, this is how Roxie has decided to wear her fly mask more recently.

I hope you have enjoyed this little fashion show from my creative little herd.  I promise to come back soon with a bit more informative post.

This entry was posted in Just For Fun and tagged fashionable horses, fly masks, Java, Roxie, Tally. Bookmark the permalink.