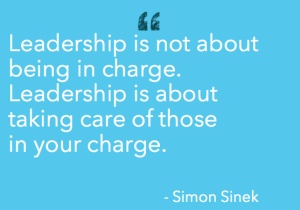 Inclement weather and a crisis at work have been a roadblock to working with the horses in the last couple of weeks.  They get hugs and scratches from me, during evening chores – and seem happy to see me on those occasions – but that has been the bulk of my interactions.  So, it is probably no wonder that while I was contemplating the leadership crisis I’m struggling with, my mind immediately wandered to equine metaphors for the situation.  I thought that sharing those might be entertaining (and perhaps a little enlightening) for you, and therapeutic for me!

I have long said, in these pages and elsewhere, that when first I had to lead a human team it was the horses who guided me.  My experiences in observing them, learning to read the signs of trouble or success, and adjusting to the feedback I received from them, laid the groundwork for doing the same with my employees.  At the same time, I’ve spent a good deal of time watching how others deal with specific situations, and noting what does and does not work.  So, here are just a few of those equine lessons that are pertinent to the current crisis I am observing in my workplace.

The ultimate ‘goer’, Stroller, jumping a fence he wouldn’t even be able to see over.

This is the horse who goes forward willingly and energetically.  It can also refer to the one who boldly tackles whatever obstacle comes up.  This is the enthusiastic individual who is every horseman’s dream.

Common mistakes – there are two mistaken approaches I have seen to this type of horse.  The first is the insecure rider who will try to slow the goer by hanging on the reins.  The results of this can vary: the horse gets dull to the pressure on the reins, and just bolts; the horse reduces its speed, but in frustration at not being able to move, dances on the spot, basically becoming an emotional wreck and “spinning its wheels”; the horse eventually gives up in a case of learned helplessness, becoming dull and losing all value as a mount.

The right way – the value the goer brings is the eagerness and willingness to tackle anything.  The down side is that they can be so eager that they can go until they burn themselves out.  So, the proper way to be a leader for a goer is to let them go, providing light guidance in direction or speed.  Recognize when fatigue is approaching, early enough to get them to slow and recover before going at speed again.  Select obstacles that may require the goer to stretch their ability – but never let them be overfaced, since their confidence can be damaged by a catastrophic failure.

Ricky, the mustang we raised, was one heck of a ‘trier’.

This is the horse who may lack some talent for their purpose, or lacks the enthusiastic energy of the goer – but it honestly tries to accomplish anything put in front of it.  This horse may never light the world on fire, but can provide great value, given the right job and leadership.

Common mistakes – the trier is often overlooked, for lacking the flash of the goer.  This can find the trier relegated to a role that does not fulfill the talent they do have, leading to boredom and dullness.  Thus, a horse who might have found their spark becomes an unnatural plodder.  On the other end of the spectrum, the willingness of a trier may lead someone to believe there is more talent their than there actually is.  This can lead to the trier being overfaced with challenges that eventually lead to either breakdown or acting out.

The right way – when working with a trier, you have to find the balance between keeping them interested and engaged, and pushing them past their true capability.  A trier will stay enthusiastic when given slowly increasing challenges, where success encourages them to reach a bit further each time.  This is my favorite type to work with, both in horses and people.  They are more challenging than the goer, in the process of determining where their talent lies, and in finding just how deep that talent might be.  The puzzle of finding the right formula of challenge and caution appeals to my sensibility – and watching the joy as they achieve more than they had ever thought of trying is priceless. 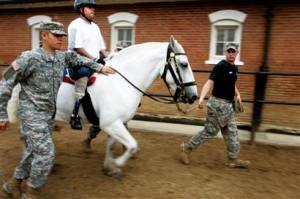 What better job for a plodder than helping veterans?

This is the horse who is not necessarily unwilling, but who generally lacks energy, enthusiasm, and often specific talent.  Although slow in development, given the right support this horse is willing to do those jobs that would frustrate the goer, and even bore the trier.  Even in those seemingly dull jobs, the plodder can be very happy with clear cues and appreciation for their effort.

Common mistakes – the first mistake is often to overlook or undervalue the plodder.  There are places in this world for plodders, and they should be valued for all that they bring.  But if they are dismissed and ignored, we lose that potential value, and they can eventually lose any sense of trying they might have had.  The other common mistake is to flog the plodder in the mistaken idea that you can generate the level of engagement or performance that might be found in the trier.  A flogger plodder generally only becomes a duller plodder.

The right way – the first imperative is to set a realistic expectation for what a plodder can accomplish.  This should not be set in stone, as a plodder may exceed your expectations along the way.  This can be, in part, because the plodder is actually a trier who has been dulled from their innate state.  The plodder may need some help to get a bit more responsive and agile than is natural – but it is not done through a heavy hand.  Instead, one should still use cues as light as you would use with the goer.  If a response is lacking, then the follow up should be a quick tap to get their attention – returning the next time to the lighter cue.  After a few repetitions, you will find the plodder more attentive, waiting for the next light cue for what you might be asking.

I have known horses, and people, who fit into each of these types.  I have watched some of both ruined by the wrong handling – I am watching it happen in my workplace.  I have also seen the magic of each of these types when they get the right kind of support, leadership, and guidance.  While the goer can be the star of the stable, even the plodder can bring great value. 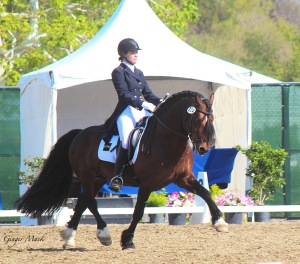 North Forks Cardi, a cob that beat the big fancy horses, to win a U.S. national Grand Prix title, because someone provided him the leadership to fulfill his full potential.

Talent management is not setting a high bar and watching to see which horses fail to clear it.  Effective and appropriate talent management is figuring out how high the bar has to be for each horse to fulfill its individual talent, without being either bored or overfaced.  The challenge of finding the right formula for the type of horse or person that I am providing leadership to is what I enjoy.  Leadership, done right, is rewarded by watching the joy in the individual who has realized their potential – whatever it is.

Be good to your horses … and your employees!