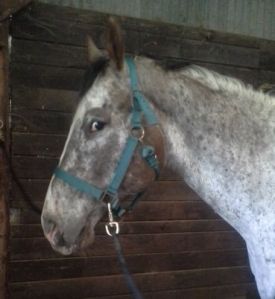 You can just see the wheels turning …

The day that I purchased Coffee, his breeder and I had a chat about horses that fit her label of “scary smart”.  For her, these are horses who are always thinking, seem to be a step ahead of you, and that learn things (good or bad) at a speed that makes your head spin.  We compared notes of scary smart horses.  Ben was one of those horses – and she was warning me that Coffee was, too.  It wasn’t long before I knew she was absolutely right!

Coffee has been one of the fastest learners I’ve ever worked with.  This can be very helpful, as when he was mugging me for carrots while being shod, and I taught him “Leave it!” in no more than two repetitions, without disturbing the farrier in the least.  The behavior was reliably repeatable ever after.  It can also be very vexing, when he learns something, quite by accident, that is disruptive.  Such is the topic of this post.

In my early work with Coffee, I was lunging off of the bridle using an attachment that connects the bit rings and has another ring for the lunge line.  This was fine, as he was accustomed to the lunge line, so not inclined to pull.  On one particular day, the little seasonal “gnats” that annoy the horses’ ears were out in force.  I soon learned that Coffee is particularly sensitive to these little bugs.  As he went around me, he started to shake his head vigorously.  Suddenly, the top of the bridle slid over his ears.  He seemed as shocked as I was, as I quickly said “Whoa!”  Fortunately, he had a solid “Whoa!” and he had not yet let go of the bit.

The next time I lunged him, at some point the head shaking began again.  Over his ears went the bridle, but this time he dropped the bit – and off he went!  From then on it became a habit.  At some point, he would give his head a shake, off would come the bridle, and he’d run off to play.  So, I reverted to the way I’d originally been taught to lunge with the bridle – by running the lunge line through the inside bit ring and over his head. 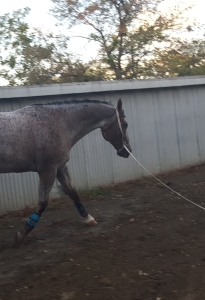 Lunge line over the bridle, in the early days

The first time that I lunged him in this fashion, he once again shook the bridle off.  However, as he did I put just enough tension on the line to keep it holding the bit in place.  As the bridle dropped, he tried to bolt and quickly realized he was still attached.  This repeated a couple of times.  Yes!  I finally had him – or so I thought.  It didn’t take him long to figure out that dropping his head when he shook it nullified my attempts to keep the line in place.

So, it was time to incorporate a lungeing cavesson.  I found a light Portugese model, and gave it a try.  With the extra straps, sitting over the bridle, I really did finally have him.  Several attempts to lose the whole thing were unsuccessful, and he soon gave it up.  He has attempted to rub the whole thing off on his leg, but with no success.  So, for the past three or four years, lungeing has been without incident  And then …

Recently Roxie has had a bit of a fungus attack on her face.  We’ve been treating it, but I’ve also been keeping her exercised, as weather permits.  Unfortunately, she and Coffee share the lunge cavesson, and we don’t want to expose Coffee to her fungus.  So, since he is quite the workman these days, I decided to revert to the lunge line over the bridle arrangement for him.  Never did I dream that, after so many years, he would remember his little trick – and so quickly.

The very first day, midway through, there was the head shake.  Off of one ear came the bridle and lunge line.  “Whoa!” (It still works.)  I reset the bridle and we continued.  He tried once again, before we were done, but I managed to interrupt him before he got much of a shake in.  The next time I lunged him, it wasn’t long before he was trying again.  And every time since, he has given at least one good try to lose the bridle.  So far, I have been able to catch it soon enough to interrupt him. 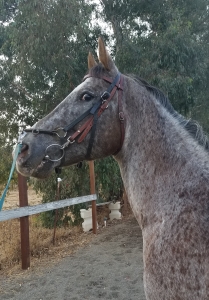 Coffee with his cavesson – too many straps to overcome

I have ordered another cavesson.  The one I use is wearing out, and will need replacing soon anyway.  It can’t come soon enough!  I have been lucky, so far.  I know that it is only a matter of time before he finds the key to getting past the little tricks I keep trying.  It’s not that he wants to escape as much as he really wants a chance to play!  No horse I’ve known has enjoyed playing as much as Coffee!

There was a time when everyone I knew would write all of this off as purely coincidental – he just gets lucky that the bridle falls off.  But I have seen his face.  I can sometimes even see it on his face before he makes his move.  This is not a happy accident – it is a planned maneuver by a scary smart horse!  And apparently one with a really good memory!

Fortunately, science is finally finding ways to look at equine intelligence, and the findings are so far positive.  Their memory rates as almost unparalleled, and their cognition and problem solving are higher than previously recognized.  They’ve even been proven to learn from observation of others – something I was told on more than one occasion just wasn’t possible.  Anyone who has lived their lives in the company of horses would probably not be surprised by any of these findings.

As with all beings, there is a broad range of intelligence in the equine world.  I have known four horses that I would classify as “scary smart” – two of them are in my barn right now.  One from the past, a mustang cross, had even reached the point of being just plain scary, because no one knew how to deal with his smarts.  Therein lies the challenge of a smart horse – if you either bully them, or bore them, they can become a serious problem.

So, if you are ever lucky enough to encounter a scary smart horse, just remember that you are still the smarter animal.  Use your intellect, not your muscle, and you may just find that you have a very special (and entertaining) partner.