The power of influence

A recent exchange with young liberals over a New York Times article (inspiration for my last post) got me contemplating influence, and the one sure killer of influence – aggression.

First, let me be clear on my use of influence.  For that, I will borrow this passage from the Merriam-Webster entry for ‘influence’.

Make note, in particular, of the second half of the first sentence – “without directly forcing those changes”.  Influence can take many forms.  It can be indirect, by modeling a behavior you hope others will follow, as in a parent with a child.  It can be more direct, as in a teacher explaining to a student – in this case it is not so much the lesson in “what” to do that provides the most influence, but in explaining “why” we do it.  But, in both cases you lose the power to influence the minute you either denigrate or act aggressively toward the subject you are trying to influence.  You may still get a result, but it is not influence.  Such a result is fleeting, lasting only as long as you hold physical power over the entity.

My mare Dani was an early teacher in this lesson of influence.  Prior to training her, I’d mainly ridden geldings who didn’t mind if you pushed them around; in fact, some were so spoiled they required a certain amount of pushing in the beginning.  But Dani, being half-thoroughbred and a mare, was a horse of different sensibilities.  When I tried the same “push through” approach with her, she would fight back.  At that point it would become a battle for survival – for both of us.  The day she nearly went over backwards, with me in the saddle, I woke up.  There had to be a better way!

From Dani I learned that every “No!” was just a signal for me to try a different approach.  Those who are highly skilled in the art of influence know this – there is always a path forward, you just have to find the entry to it.  Once I learned this about Dani, it became less of a struggle and more of a puzzle to solve.  The result was that most of her training was not a direct “I do this, you do that” approach.  It was much more organic, with many movements coming out of an “I wonder what would happen if I did this” approach.  Dani became a partner in the dialog – influencing my behavior as much as I influenced hers.

Back to the anti-Trump exchange.  The point the article tried to make was that personal attacks on people who voted for Trump were driving many further to the right.  But the comments on that post showed that the young anti-Trump readers completely missed the point.  My own comment was in support of the author, because I know from long experience that aggression shuts down all option for influence – whether with people or animals.  But, somehow, I was the one out of touch.  Responses reflected an aggressive attitude toward those who voted for Trump – and the few brave Trump voters who commented showed that the aggression was working to push them further away from dialog.

I fully understand the temptation to resort to aggression when faced with seeming opposition – but unless you intend to kill the adversary, it never works.  Whether you’re dealing with dogs, horses, or humans, your first act of aggression engages the limbic system brain, and shuts down the parts of the brain engaged in learning and critical thinking.  Once the barriers of defense are raised – think “fight or flight” – all attempts at influence are blocked.

The amygdala is part of limbic system in the temporal lobe. It was first believed to function as a brain center for responding primarily to anxiety and fear. Indeed, when the amygdala senses threat, it becomes over-activated. In students, these neuroimaging findings in the amygdala are seen with feelings of helplessness and anxiety. When the amygdala is in this state of stress-induced over-activation, new sensory information cannot pass through it to access the memory and association circuits.

“The Neuroscience Behind Stress and Learning“, Judy Willis, M.D.

We succeed through influencing, and being influenced by, others.  Teamwork consists of multiple people being able to have influence on an outcome.  Civil society survives upon multiple influences being allowed to play off of each other, to find a balance that serves the broadest needs.  But the art of influence relies upon two things – our keeping minds open enough to receive and consider the influence of others, and our approach to others being civil enough that they may receive some influence from our views.  I approach my interactions with my four-legged family in the same way – and they influence my behavior as much as I do theirs.

To close, let me use the tale of two puppies.  The first, a young Border Collie and a young Shetland Sheepdog.  The caretaker of the first puppy believes in the “shove their nose in it” method of training.  She believes that the animals do bad things just to spite us.  The caretaker of the second puppy views him as an infant who will make many mistakes on the way to adulthood – but the path taken now will determine who that adult is. 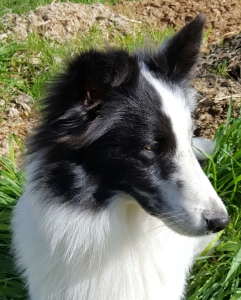 My little Jake, “puppy number 2” in my tale.

Clearly, neither of these puppies learned a particular lesson in these scenarios – there was too much time between the “crime” and when it was found for there to be a lesson learned.  However, based upon the reactions of the two caretakers, and assuming this is indicative of a pattern (which, it is, by the way) – which of these puppies do you think will be more open to influence of its behavior while it is growing up?  Which puppy will be interested in listening to suggestion?

The next time you don’t agree with someone, instead of attacking see if you can find a more reasoned approach.  Engage in dialog, rather than attacking.  The next time your animal companion behaves in a way you don’t like, particularly if you feel your own emotions welling, find a way to lower defenses and influence behavior rather than taking a defensive 0r (worse yet) offensive approach.  Start thinking in terms of influence, rather than control, and you just might find even greater pleasure in all of your interactions.

Be good to your fellow beings!