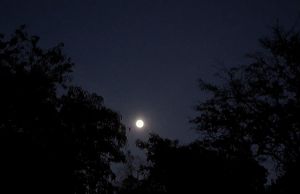 The spooks and goblins have come early to our place this year – only it’s carrots, not candy, that is getting handed out!

It’s been ten weeks since Tally sent me rocketing skyward, only to have gravity bring me crashing down with a thump!  The cause of my unscheduled dismount will remain ever a mystery – some hidden goblin under the trees at the side of the arena, whispering threats of bodily harm, no doubt.  Since she was a foal, the typically doe-eyed Tally has been prone to finding those hidden spooks and goblins at the most surprising times – but never with quite such a damaging result!

So, with all the time I’ve spent on ice these past ten weeks I’ve had plenty of opportunity to ponder how to avoid a recurrence of my missile impression.  At the core of the event are three key issues:

This  gave me three clear things to work on: improve her response to the reins; “program” a response to a verbal “Whoa!” for cases where reins are insufficient; and desensitize her responses to both external events and to things banging around on her body.

The first two are easy.  My mother has actually been doing a really good job of working on both of those objectives.  Tally’s response to the vocal “Whoa!”  is getting more consistently prompt, and the last time I tried some rein work her responses were butter-soft.  So, with those two items well on the way, that just leaves the desensitization.  Enter the goblins …

Goblins come in many shapes and sizes.  Our mission is to gather and employ as many different types of goblins as we can, and introduce them to the lovely Tally.  My mother has already worked with the “whip rattling on corrugated tin” and “rattly plastic bucket” goblins.  Just this week I conjured a new goblin – “plastic bag on a whip” goblin!

This goblin is a particularly unpredictable demon.  It may come from in front … or it may sneak up from behind.  It might appear high … or it might come in low.  It can move fast, and it can move very, very slowly.  And then there is that really scary sound!

Employing the positive reinforcement method that helped with Tally’s fear of new objects – in short, touch it and get a carrot – I set out to have her “make friends” with the new goblin.  Snorting, eyes wide, we started with a simple “touch the goblin with your nose”.  From there, I had the goblin reach up and “pet” her shoulder … a little dancing, then tense acceptance.  The left side was a little more dramatic … but soon acceptable.  I was most surprised when the goblin “flew” over her head to little more than an ear flick.  Good girl!

We took a break and wandered up the arena, when the goblin took another pass over her head – horrors!  The goblin was much worse in the far end of the arena!  A few moments of dancing, and Tally finally realized the “goblin” was the same as it was before – only the scenery had changed.  From there we wandered to different parts of the arena, and the goblin danced around different parts of her anatomy.  By now, the goblin had become just an excuse to get bits of carrot.

At the end of our “visit” with the plastic bag goblin, there was no sweat, no stress, no resignation.  There was only acceptance of the silly goblin that seemed determined to dither about.  By the end, for each movement the goblin would take, Tally’s sole reaction was to softly touch the treat pouch, waiting for her reward for courage.

We will stay on the hunt for new goblins – but we’ll have to make return visits to the goblins we’ve already met.  For this is something else we have learned about the lovely Tally – it is not always about the goblin itself, but is often about where she meets the goblin.  With Halloween rapidly approaching, and a full moon on tap, I suspect there may be many goblins to discover this week!