It seemed like a good plan.  Having gone out very early for some Christmas shopping, missing all the lines and traffic, we were now ready to do some overdue decorating.  With the latest storms, everything has been too sloppy for turnout, but the arena footing was finally safe.  Why not put Noble and Java out for some sunshine and snacks while we strung lights?  Well … it seemed like a good plan …

Noble has been going a bit stir crazy in the rainy weather, and this was the first opportunity for him to stretch his young legs.    As my mother haltered Java, I moved to the front of the barn to get carrots for Noble.  The fact that I had not picked up his halter, while Java was already haltered, was not an acceptable situation!  His temper flared and he began to stomp around his stall.  When I did return with his halter, I got a look that clearly said “It’s about time!”  He shoved his head into his halter, and stood impatiently still while I buckled it.

The walk to the arena was slightly tense, but obedient.  I could feel his excitement, and some strides had a little extra flourish – but

Noble, being quite boring when first let out today.

gentle reminders were enough to keep him in line.  Once in the arena, I let him loose and waited for an explosion … nothing!  Instead, he settled himself down to nibbling the grasses around the edge of the arena.  Fair enough!  This plan was going to work out just fine.  Now, off to string lights!  Yeah, right …

My first indication that something wasn’t right came about twenty minutes later, when I heard the sound of the chain clanging on the arena gate.  This occasionally happens when the boys play, and Noble forgets to stop in time.  In his first months out with “Uncle” Coffee, he learned to mimic Coffee’s sliding stops … although, not being built for it, he’s not very good at it.  So, the first time I heard that sound I did not think much of it.  Then it repeated, multiple times in rapid succession.  I walked to the driveway to see if I could catch a glimpse of what they were up to.  I saw Java calmly grazing, so I began to turn away … and then I froze.  There should have been two lines of fence between me and Java – the pasture and the arena – but there was only one.  Loose horse!  But was there one or two?

I called back to my mother that we had trouble, and I headed down the driveway toward the arena.  Sure enough, there was Java in the little clearing between the arena and the front pasture, calmly grazing.  Behind him was a different story – Noble was in a complete panic!  Java had moved to the side of the parked horse trailer, so Noble could no longer see him.  He kept running around the end of the arena, calling for Java and slamming into the gate.  I called to him and he stopped to watch me come, head high and nostrils flaring, still in a slight panic.

When I reached Noble, he let me put his halter on.  Home free, I thought.  I have him, and mom is now headed to Java with his halter.  Crisis averted.  If, like me, you are a fan of murder mysteries, you’ll know that was the signal that things were about to get much worse!

As I reached for the gate chain, Noble clearly decided I was taking too long.  He reached out with his front leg, pawing at the gate – and his leg went all the way through the bars.  As he tried to pull his leg back, he felt the hold of the metal gate and panicked. He started to throw his weight backwards and a vision of his leg snapped in half flashed through my brain.  The gate slammed against the chain as he continued to struggle.  I tried to pull him forward, but knew I could do nothing.  At the moment the gate hit the chain, he doubled his effort to pull away – he coiled his haunches under him and gave one huge thrust.  The effect lifted his front end off the 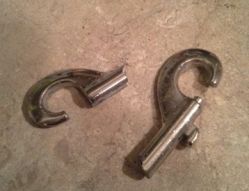 The snap that broke before my colt’s leg did. I’ll take broken equipment over a broken horse any day!

ground, and the gate with him.  Fortunately I believe in keeping things as “breakaway” as possible around horses  – and it paid off this time!  Noble’s thrust lifted the gate off of its hinges.  The weight of the gate came down on the chain and, as he prepared for another pull, the clip holding the chain snapped in two.  The gate fell at his feet and he was free, with all four legs still intact!

Unfortunately, the clanging from Noble’s struggle spooked Java and he went bolting into the back of the property – out where we’ve been digging holes for the new turnout!  Off my mom went … and there I was with a panicked colt who now felt completely abandoned!  How do you get nine hundred pounds of frightened and excited colt back to the barn, while still recovering from the recent loss of one year of your own lifespan?  Java bolting around post holes was bad enough – but (as cold as this sounds) a twenty-five year old retired gelding snapping a leg in a hole is just not as tragic as my eighteen month old dream colt doing the same!  So, above all, I needed to be able to keep hold of Noble as we tried to get to the barn and safety.

I don’t really know how I got him into the barn.  Every muscle in that colt’s body was ready to bolt!  Especially with the muddy ground, I was in no position to hold on if he actually tried.  I just kept talking and trying to keep his attention on me.  It took tremendous self-control on his part – I watched the struggle in his body and face – but we made it to the barn and into his stall.  I could see my mom still trying to catch Java, but my concern was Noble.  His eyes were bulging and his breathing was heavy … but all of his parts appeared to be healthy and intact.  As I stood talking to him, he slowly began to calm down.

The whole barn was roiling by now, with all of the excitement of Java galloping through.  When I felt that Noble was calm enough to step away, I grabbed some hay to calm the masses.  About that time I heard my mother coming back with Java.  We settled everyone and returned to inspect the arena.  Java had broken through the chain we keep over a small opening, for ease of human passage into the arena.  Noble was so focused on where Java was, outside the arena, that he never made it to the corner where Java exited.

We did manage to finish stringing lights, although it was several minutes before my heart rate returned to normal.  Life with horses is certainly anything but dull … but here’s hoping for a long time between excitements!

This entry was posted in My Journey and tagged adventure, Java, never boring!, Noble. Bookmark the permalink.

3 Responses to Too much excitement!