About fifteen years ago, when I backed off from riding seriously, I got my first dog. It was late in life, for an animal crazy girl like me. I’d grown up loving dogs, almost as much as I loved horses. But, by the time I was an adult, I’d come to mostly not like them. All of my dog experience was with dirty, smelly, ill mannered, or even dangerous dogs. My life had been spent with prey animals, goats and sheep along with my horses, and I’d seen too much of what dogs could do to them. So, I was content to leave the canines to others – until I had an amazing week with some amazing dogs.

I was helping friends, and former students, transport two horses to their new home in Washington state. As it happened, these 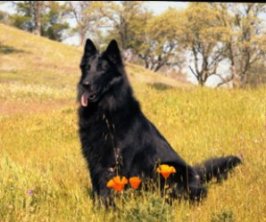 Hurri, one of the Belgian Sheepdogs that showed me what it was like to be around truly well trained dogs

friends were breeders of Belgian Sheepdogs (I believe they are called Groenendael elsewhere). They lived with eleven of these dogs, and an old Husky – all in the house, and all sleeping in their bedroom at night. In case you are not familiar with the breed, these dogs are only slightly smaller than a German Shepard – a houseful, indeed! I’d met one or two of the dogs previously, but was not prepared for what a houseful would be like. I fully expected chaos, but saw quite the opposite.

I was most impressed at dinner time. Every dog was there in the kitchen. When the command “Places!” was given, every dog went to a different spot – some in pairs and some alone. Each dog sat motionless while the bowls of food were placed, then all awaited the “Okay!” to eat. It was miraculous, to me! I gained a new appreciation for what life with dogs could be!

My own Brita, as good a teacher as she was a student! I miss you, Boo!

When the time came to get a puppy, like everything else I do, I consumed everything I could on dog training. I read every book I could get my hands on, I watched all the dog training shows, and I took classes – starting with the woman who taught my friends how to train their dogs. I was not after competition (although I did dabble in Obedience trials) but I wanted to make good citizens of our dogs. We have now had several dogs in our home, whether permanent residents or on their ways to other homes – and all have received compliments on their good manners.

When I returned to focusing on the horses, my dog training had given me a perspective I hadn’t held before. I was fortunate to have had a Dressage trainer, in the past, who has as insatiable a curiosity as I, and who studied behavioral principles. But, I had a new appreciation from the dog work. Although there are clear differences between the species – you can get physical with a horse with no harm but never should with a dog – there are more similarities. Both species are highly social, and both have been molded by us for millennia to serve our various purposes. A byproduct of that last situation has been that they both posses an uncanny ability to read us – our body language and emotions.

As I began to work with my horses in earnest, I began to realize just how much people take for granted with their horses – much like the assumptions people make about their dogs. Horses are not born knowing how to lead, tie, pick up their feet or be ridden, any more than your dog is born knowing how to heel or walk on a leash. Because they learn quickly in a linear fashion (action A leads to reward or cessation of pressure) and because they read us better than we know, many horses quickly learn behaviors without direct “training” – for better or worse!

To give an example, my old horse Ben, would always stand, unattended, while I adjusted jumps on the ground. None of my other “knuckleheads” seem to be able to do this. As I thought about what I had learned from dog training, I realized that I must have created a situation with Ben that facilitated his understanding that he should stand at those times. Thirty five years after the fact, I couldn’t tell you what that was. But, I was as guilty as anyone of taking for granted some of the “little things” my past horses seemed to just “know”. I now have the realization that all behavior I want in my horses is up to me to teach – just as it was with my dogs. In fact, why not borrow from the dogs?!

So, I have been diving into my trove of dog “tricks” to see which may be useful with my horses. To date, these are my favorites:

Tally in a nice “Stay” before bridling (and catching a yawn, while she’s at it!)

I’m still exploring other commands. ‘Heel” seems obvious, all my horses essentially lead as if in heel, but I haven’t taken it to the point of a command.  I will probably stop short of “sit” and “down” (although, I hear some people swear by laying their horses down as part of their training). But I am finding great fun, and usefulness, in teaching my horses “dog tricks”. In later posts, I’ll talk about how I taught some of these, and how I make use of them with the horses. But for now, I think I will “Leave it!”