Almost as if someone flipped a switch, Noble’s first birthday has marked a change in attitude.  My once herd-bound boy is becoming more independent, and his once healthy respect for “Uncle” Java has been replaced with an impish drive to torment him!  An old friends would have said that he is feeling his gonads – except that he doesn’t have any!  When he required surgery to close a hernia, at barely past two months old, his breeder decided to have him gelded to spare him a later surgery.  Never having had a colt gelded so young, I was not sure what to expect in his development.

I have heard many arguments from owners for why they wait to geld until later – chief among them are increased muscling (true, but you sacrifice some height, as testosterone is a growth inhibitor) and the “spirit” that comes with testosterone.  As you will see from this small gallery of recent photos, gonads are clearly not needed for the development of “spirit”, spunk or coltishness! 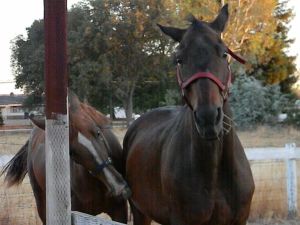 A rude interruption of a good snack!

Java tries to reassert some authority …

… but Noble is not impressed!

Java is quicker to intercept this time!

Can’t win them all, Noble!

This entry was posted in Just For Fun and tagged Java, Noble, play. Bookmark the permalink.