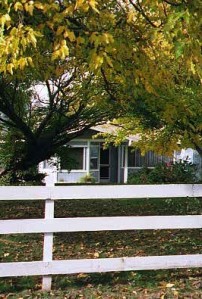 Today I am diverging from the usual subject matter in recognition of a special anniversary.  It has everything to do with horses, and yet is not about the horses.  Twenty years ago, on this date, escrow closed on a small blue house on two and a half acres.  At age sixty, my mother became a home owner – something she never expected to be.  Not only that, but seemingly against the odds, she got the very house that she wanted.

I was the catalyst for the house hunt.  Our little four legged family had grown over the years, numbering five equines, four goats, and three sheep by the time we started our house hunt.  For several years we’d rented barns to house our little herd.  One barn, a place I still dream of to this day, was located behind two rental homes.  One day the residents of one of the homes informed us they’d received a foreclosure notice, as the property owners had stopped paying their mortgage several months before.  We had thirty days to find somewhere that would accommodate our whole menagerie.

Along with our horses, our little herd of goats and sheep (here at one of the rentals) had to move three times before settling into their final home.

We ended up finding space in an old barn that had once belonged to a top gaited horse trainer.  We were there about nine months, and it was a miserable experience.  The barn owner was a pleasant fellow, but ignorant about horses.  He bought the place for the house, and was renting stable space for extra money.  Other tenants were starving their horses; injuries were going untreated; and the whole barn flooded in the winter.  By spring, I could take no more, and we found a rental where we not only had a barn, but could live on the property as well.

There was a lot to love about that rental.  We were on ten acres surrounded entirely by alfalfa fields.  No facilities for training, but lots of trails to access.  Isolated out there in farm country, the only sounds at night were owls and coyotes.  The fencing was great, and all of the critters had lots of living space.  We might have stayed for a good long time, had the property owner not decided to sell.  She did offer it to us, but the total property was twenty five acres, and the prices in that region were well beyond our means.

Remembering the nightmare of our last move, I’d had enough.  This time when we moved everyone, I was determined it would be to our own property, under our terms.  With our income, at the time, it was going to be a stretch – and the area we’d lived in for nearly thirty years was well out of our price range.  So, I started looking in the next county.  We were taken around several properties by a realtor when she led us to a place rimmed in white ranch fence.  As I parked, mom and I looked at each other and said, “This can’t be in our budget!”

The arena that was the icing on the cake!

The house was small and unremarkable – but that was the least of our interest.  It had a large barn, a small barn, a small turnout in front, and a large pasture in back.  But the icing on the cake was a sand arena with sprinklers and lights!  The price was seven thousand dollars more than we’d been approved for in the government loan program that we needed to afford a home.  But when we got back in the car, mom looked at me and said, “This is it!  This is my house!”  So, we had to try.

Our mortgage agent was available that day, so we went straight there.  We told him about the house and the higher price.  He plugged the numbers into the system, and said we’d have an answer in a few moments.  Having already pushed the button, he then told us, “I should tell you the system is binary.  If you get declined for this amount, then you are declined and will not still have your approval of the lower amount.”  Mom and I looked at each other in horror, and I said, “Well, I guess it is up to fate.”

We chatted, somewhat nervously, while we awaited the verdict.  When the agent said the answer was in, we waited breathlessly until he said with a smile, “You are approved.”  We told him that it was a dirty trick not telling us before he clicked, but he said he wouldn’t have done it if he weren’t sure we’d qualify.  Still a dirty trick …

Our second visit, and the property was showing all of its charm.

The rest of the sale went more smoothly than we had ever imagined.  We had a fabulous realtor, and the sellers had a poor one.  Our first offer was accepted, with three thousand off the price and requirements for a list of inspections and repairs, with the sellers paying.  None of us could believe that the offer was accepted without a counter!  Clearly it was meant to be our home!

This has been a wonderful home for us and our critters.  We’ve had as many as eight horses here (too many), as well as an assortment of dogs, cats, rabbits, and poultry.  We’ve had our challenges – stray dogs killing chickens, well pump going out, flooding – things that go with the territory of living in a rural area.  I could wish for more land, and it can get rather noisy with so many neighbors so nearby.  But we’ve made quite a refuge for the wildlife here, which makes it that much more of a refuge for ourselves.

Recently a Facebook friend characterized living on acreage this way: “[it] is like painting the Sydney Harbour Bridge…once you do it it’s time to start over…”  I could not have put it better myself!  There is no doubt that the “to do” list is never ending – and the horses do their part in making sure that things are broken often enough to keep us from being bored.  Yet, the longer that I live here, the more I dream of trading in the desk and computer permanently for a pitch fork and chainsaw.

It would be hard to give up this view from my bedroom!

It is likely that one day I will return to boarding my horses, and move myself to an apartment, where someone else is responsible for keeping up the grounds.  However, I look at all that my mother does on the place at age eighty, and I think that perhaps that time is still many years away.  After twenty years of making this a home for us and our animal companions, it would certainly be difficult to leave it behind.  So, here’s to another twenty years!

This entry was posted in My Journey and tagged home horsekeeping, home ownership, house buying, our barn, our home, rural living. Bookmark the permalink.