Mom and her Coffee

In a recent post, I discussed the general notion of how you can change the horse’s body, for better or worse, based upon the nature of the work.  The inspiration for that post came from Coffee.  Recently, my mother had been commenting on how much more handsome Coffee is than when he came here.  I put it down to her total infatuation with her boy; but, after taking some current photos, and digging out some photos from his first year, I have to admit that she is absolutely right!  There have been changes to his physique that I’ve noticed – and some that have apparently sneaked up on me.  For this post I will share some of those photos, and discuss some of the specific changes and their causes. 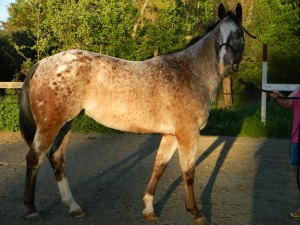 Coffee in the beginning 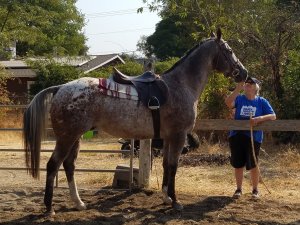 When you look at the pictures of Coffee then and now, the most obvious difference is the change in posture.  The overall feel of the first Coffee is one of a very Earthbound creature – his chest hanging heavily between his shoulder blades, with an overall feeling that gravity has him solidly grounded.  The Coffee of now, on the other hand, gives the impression of a light and upright being who could easily take flight at any moment.

If the standing photos are not enough to support those impressions, consider the following photos of Coffee in motion. 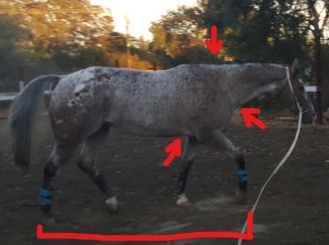 Coffee’s posture in trot, then, reflects the same Earthbound quality of the first standing shot.  Notice the following, indicated by the arrows: 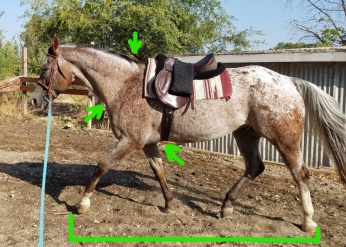 Compare now to the photo of Coffee as he naturally travels today.

Notice also the change in scope of his stride.  The photos are taken at almost exactly the same moment in the stride.  In the current photo, it is far more likely that his front foot will land near where his nose is pointing, while the before photo is likely to land far short of that.  Notice, also, the reach of the moving hind leg in the two photos, with it now tracking further under his trunk.  Overall, there is a lighter feel in the second photo, with the landed front leg, at the same angle in both photos, feeling very grounded in the first photo, but already pushing up and away from the ground in the second. (You hear a lot about the role of the haunches in collection, but that is only possible when the forehand also pushes away from the ground.  Dressage Headlines has an interesting piece on this topic.)

Now let’s look at how this change in travelling has affected his physique – and vice versa.  This is not going to be a scientific treatise on anatomy – for that I would strongly recommend The Rider Forms the Horse (Burger and Zietzschmann).  However, I will touch on some of the muscles at play here, and how the type of work, then and now, have affected them.

When Coffee came to live with us, he’d spent two years being trained as a Western Pleasure show horse – though he never made it into the show ring.  His posture under saddle was much as the first lunging picture, above, save for his head being curled well behind the vertical, and his gaits even further restricted.  His apparent confirmation reflected that work:

All of this development, and his overall downhill impression, are the result of the muscles largely playing the role of catching his bulk, as gravity brings it toward the Earth with each stride.  This is the natural state of horses, who are engineered for the haunches to fling the mass forward, and the forelegs to catch it.  However, with training that emphasizes a lowering and curling of the neck magnifies the effect of gravity on the thoracic sling muscles (not to mention the lower front legs).

Looking at Coffee’s neck muscling from the time continues this story of work that emphasized a low neck carriage.  The appearance of his neck is rather short and thickened.  The two circles indicate areas that are over-muscled.  The thickness in the upper circle is made up mainly of the splenius and capital semispinal muscles.

“The splenius muscle should not function at all until the neck has attained its correct riding shape by means of the other musculature of the upper neck … and is established on the withers. … It works in the same direction as the capital semispinal muscle which gives the neck its shape by “supporting it” while the splenius muscle serves to provide freedom of movement.  This can only be effective in riding if the shape has been established during the initial stages of training.  Otherwise, it gives rise to an upside-down neck and is followed invariably by the horse dropping or letting its back hang through.”

The finish of that quote, from The Rider Forms the Horse, rather well describes the way Coffee traveled in the early days – letting his back hang in movement.  The second circle in the neck photo shows another effect of a hanging back and low forehand – a wad of muscle in front of the shoulder, created through the very “catching” of the weight that I described above.  Finally, note the rather thick and hanging throatlatch area.  Now, compare that to Coffee’s neck today. 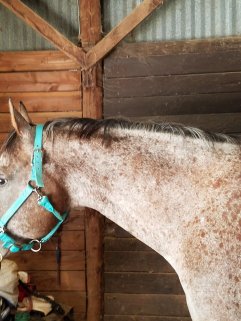 Here we have a very different picture – what appears to be the neck of a completely different horse!  The mass that was behind his head has smoothed out, and the throatlatch area is now lighter, leaner, and more open.  The mass in front of the shoulder has disappeared, and the overall appearance is that the neck has lengthened.

Two things to note, with regard to his current neck structure – with further work, and moving more toward collection, I would expect to see the crest get more curve, and the upper connection of neck/withers/shoulder to gain more thickness.  When I look down upon his neck, in its current state, it is a fairly uniform thickness from shoulder to head.  As work advances, you expect to see the thickest part to be in front of the withers and shoulders, tapering to slightly narrower where it joins the head.

His overall conformation now reflects much more upright work, swinging through the back, and staying overall lighter on his feet.

Not only does Coffee’s appearance seem more uplifted, and his legs appear longer than before – we have actual proof that it’s true.  Over the course of our work, Coffee has actually gained an inch in height!  He came here at six, past the point where his skeleton would be growing – but he has gained a solid inch.  I’ve experienced this with horses, in the past, when the pectoral and other sling muscles strengthen, as the horse’s movement becomes more ‘uphill’, and they lift the structure they are supporting.

The Work That Got Us Here

The point of all of this, of course, is that the work you do forms the horse that you have.  With Coffee, the very first thing was to teach him to move again.  He’d spent a couple of years in the slow shuffling gaits of Western Pleasure, and had lost all ability for free flowing movement.  So, forward was the first order.  This began the reshaping of his haunches, and somewhat of his neck.

Once we had forward, the next aspect was to change his balance and begin to get him lighter in front.  This was started through work in transitions, but improved through lateral work: in-hand, on the longe, and eventually under saddle.  Lateral work is often touted mainly for creating straightness (and related flexibility) in the horse – but it also causes them to step more carefully.  Think of a ballet dancer, as they walk putting one foot literally in front of the other – try it yourself!  You have to change your whole way of walking in order to not tangle your feet and fall over.

Finally, we had to correct his trained in response to any touch on the reins.  In other words, we had to move him from low and curled to up and open.  This, too, leads to a lightening of the forehand, allowing the haunches to step further under, and begin the hind joint flexion that is the biomechanical basis of collection.  It also invites him to reach out and forward with his poll, leading to the longer more arched neck.

We are really just beginning to see the beauty that will develop in Coffee over time.  All of the transformations he has made, thus far, will continue.  If all goes well, on the anniversary of this post I will be able to post even more beautiful images of our beloved Coffee.

As I stated before, I have written this from the specific experience with Coffee.  I shied away from getting deeply into the anatomy and science, as others are more expert in those aspects than I – and many riders do not have the time or interest to learn each muscle by name.  If you are one of those who likes that level of detail, as my mentor most certainly was, then locate a copy of The Rider Forms the Horse.  It is certainly one of the most flagged and dog eared books in my library!

If you are not such an anatomy nerd, take heart.  You do not need to know the names of each and every muscle in order to know what correct development of a classically trained horse looks like!  In future posts I will explore, in a bit more detail, some of the aspects of development that I have touched on here.  In the end it is not about memorizing fancy Latin names – but about schooling your eye to see the story the horse’s body is telling you.  We still have a lot of work to do with Coffee, but so far I’m pleased with the direction of the plot.