I am not an alarmist, though some might think so after reading this post.  Those who know me personally will vouch for the fact that I rarely raise the alarm.  But I am seeing a trend that alarms me.  It is nothing new – I saw signs of it when I was in college, oh so many decades ago.  But the advent of social media, and a growing trend toward seeing total shutdown as an answer to things we don’t like, makes me nervous about the potential this movement has.  People are beginning to take notice of the real problems in the horse industry, and for many of them the only answer is the complete end to having horses in our lives. 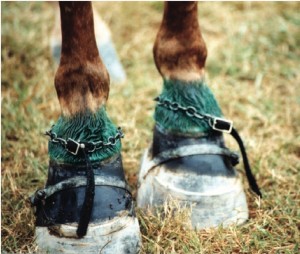 Caustic substance applied to the legs of a gaited horse.

I remember, as a young rider, finding out about the deplorable treatment of gaited horses.  It was an early lesson in just some of the practices in the horse industry that should have no place.  Though the practices continue to this day, and are often a popular cause in social media, those early efforts against them did manage to push most of it away from the main stream and into specific corners of the country.  The breeds and riding style associated with it are far less popular today than once they were.

The fact that it still exists is one argument for the case that not much is likely to change in the horse industry in the U.S.  Other countries have moved further along than we – many now not only ban tail docking (in horses or dogs), but they have also banned the clipping of whiskers and the hair inside the horse’s ears.  Most competitive American riders would be apoplectic at such a suggestion!  If we cannot pass a law to ban such deplorable practices as soring, would we really get close to banning horse ownership?

Pragmatically, I find the odds unlikely in my country, in my lifetime, that having animals will be outlawed.  But that is not the only potential threat from extremist animal rights supporters.  What alarms me even more, is that the modern animal rights extremist seems to have no real knowledge of animals nor any actual concern for them.

I once weighed in on a FB group conversation about chickens and eggs.  I do not like factory farms, but I have long had a small group of hens from which I get eggs.  Members of the group argued that we should stop using all products from animals because it was all exploitation.  When two of us pointed out that we had chickens, and the chickens lay whether we use the eggs or not, we got a lecture on the development of the domestic chicken (somewhat misguided, and not a lecture I actually needed).  So, I asked what the plan should be.  If we turned all of the chickens loose, they would continue to reproduce and continue to produce eggs – so, again, why not use them?  The answer I received was shocking from someone professing to be a vegan standing up for the animals – they would have to be destroyed!

I cannot, as deep as I dig, come up with a single true animal lover whose answer to a humane treatment issue would be mass slaughter.  Yet, this person is one of many who has tried to shame me about my life with animals.

It would be easy to dismiss this extreme view, just one of many examples I’ve encountered.  However, as I look around at the current political situation, I find it something to be concerned about.  I recently finished reading a fascinating piece in The Atlantic about the rise of violence on the left.  It is sobering that a once fringe group who believes that violence is the answer, and whose sole purpose is to block the rights of those they disagree with, is winning main stream support.  I do not see this group suddenly taking interest in our horses – but if violence becomes an acceptable way to block speech, and so-called animal rights supporters believe that mass slaughter of chickens is the answer to inhumane care, is it such a big leap to imagine what could happen?  After all, violence has been a tool in the animal rights movement before.

One of the groups that has targeted our university.

I have spent most of my life living in and around our local university.  It is a world renowned agricultural school that also happens to have a primate research center and a veterinary school.  During periods of the 80s and 90s this university was the target of many attacks by self-proclaimed animal rights groups.  Buildings were broken into and animals stolen or let loose.  The very animals they claimed to be protecting often died.  To me the height of this idiocy came when a new building was fire bombed during construction.  The building, situated near the veterinary school, was a planned diagnostics lab!  There are no animals living in this building – only some dead ones submitted by farmers who want to make sure they do not have a communicable disease in their herds.  Tests are run in this lab – no animals are harmed here!

Such is the irrationality that can come when people ignorantly jump into a cause, and when violence becomes a “normal” path.  As I watch people in the horse world defend the indefensible, or get into fights with people who they fundamentally agree with but for one nit-picky point, I begin to see the potential for more radical elements to find a way in.  It would do the equestrian world well to look at what has happened to the circus and marine parks.  Although some of their slow demise has been economic, there is no arguing that the drumbeat from animal rights group has been a huge factor.  Good changes can come from social movements (killer whales should never have been kept in captivity), but they can also quickly get out of control (what was wrong with horses in the circus?).

Is there truly a rational defense for this?

Those of us who have horses, whether or not we compete, claim we love them.  Why do we find it so hard to prove that by coming together and standing up for them?  Why is it so hard for all of the “horse lovers” in the FEI to ban practices that even violate their own rules?  Why is a horse’s natural tail movement so repugnant that some Western riders nerve them?  And some of their governing bodies are okay with that!

If we don’t find a way to prove that we do what we do for love of the horse (or dogs), and not just as a way to win fame or money, we may find the very future of these activities in other hands.  Write to the FEI, to your local clubs, to your national governing bodies.  Learn to recognize stress or pain in horses, and call it out in competitions where you see it – find the steward, take pictures, write the governing body for the event.  Let’s find peaceful, polite, yet forceful ways to speak for the horse, so we can ensure our continued enjoyment of the lives we share with them.

Be good to your horses!  And help ensure others do the same!