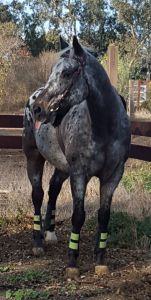 Even as Tally gives me greater hope that we will become a real partnership someday, and as mom and Coffee progress in their relationship, Nash has presented us with a serious dilemma.  I have not written much of what’s been going on with him, because I was trying to sort out the cause, and to be sure that it was not all in my imagination.  As the weeks go by, the cause becomes even more mysterious – but the reality of it becomes even more disturbing.

For those who have not been reading this blog for long, Nash detached the lens in his right eye last year.  At the time, the veterinary ophthalmologist was amazed at how well Nash had adapted.  He has sight in that eye but, as the vet described it, he’s seeing as if looking straight up to the sky through several feet of water.  He can see best in high contrast, and badly in low light.  However, the vet was right – he seemed rather well adjusted to this situation.

Early this year, he began to show sensitivity to loud or sharp sounds.  His reactions were dramatic and somewhat out of character, so I set about trying to accustom him and lessen his reactions.  As the year progressed, he did not.  The incidents were infrequent, but still dramatic.  Into the mix, he began to buck on the lunge – something he’d never had a tendency for in the past.  Though it was potentially pain, there were no other signs of discomfort.  Then, about two months ago, retirement seemed the only option.

We’d been doing some in-hand work, and he was trotting on the lunge when he suddenly went off.  We’d become used to him suddenly galloping and bucking off – but this was much different.  This was pure terrified prey animal in panic mode.  I struggled to keep hold and bring him back under control, and when I finally did he stood there quivering, eyes bulging and nostrils wide. I stood there looking at a horse who just had a frightening experience – and I had no idea why.

I had the vet out to check on some issues in our little herd, and had her take a look at Nash.  One of my suspicions was confirmed – he’s developing cataracts in his “good” eye.  He’s probably now seeing only strong contrast and large forms in that eye as well.  Were his issues due to lack of adjustment to losing his sight?  Possible, though not common in my experience.  But that was not the only element in our dilemma.

Nash has been a head shaker as long as we’ve had him.  For those who aren’t familiar, it’s a condition in which head shaking, twitching, or bobbing becomes chronic and uncontrolled.  The primary theory is that a nerve in the face is misfiring, and one of the main triggers seems to be sunlight.  Nash has always had a fairly mild case, easily controlled with a fly mask in daylight.  In the past few years, the symptoms were hardly to be seen.  This year it’s back, and with a vengeance.

Nash likes to spend the day out in one of our paddocks.  A few weeks ago I get a call from my mother, asking for advice.  She’d gone to get Nash and his nostrils were saturated in blood.  He’s had the odd nose bleed over the years, so I didn’t think much about it.  However, the next day he came in from the paddock again saturated in blood.  This time I was there, and I noticed he was snorting hard and sharply – another symptom of head shakers.  We tried one more time, the next day, and pulled him in as soon as we heard the snorting – nose only starting to bleed.

So, he can’t be outside during the day, even with a fly mask.  With his eye sight issues, he cannot be out at night – our property is not safe enough for a horse with no sight.  Life in a stall is far from ideal, but the only option available now.  He gets brief turnout, before the sun is high, and light work several times a week.  Intermittently, we’re still noticing incidents of inexplicable overreaction.  Mostly manageable, they nonetheless raise questions about what is really going on.  Then came the incident that has heightened our concern.

Nash has always been Mr. Steady Eddy when it comes to getting trimmed and shod.  Like most former racers I’ve worked with, shoeing is just routine.  The last visit was no different, he was being Mr. Cooperative, as usual.  The farrier went outside to prep a shoe, and suddenly Nash went into full panic mode.  He was leaping around and about to throw himself backwards when I managed to get to his head.  I was talking to him and trying to soothe him, but he was not listening.  I finally yelled at him, and that seemed to at least alert him to my presence.  As he stood shaking, we tried to figure out the trigger. We did have the fans running, but that wasn’t so unusual.  Still, I turned him so he could see the fan.  It wasn’t clear if that was really the cause, but he slowly began to settle again.

The farrier continued, and all seemed to be back to normal. He was working on a back foot when Nash suddenly went into full panic mode again.  He threw the farrier to the side with a sudden movement, then began acting like an animal in a trap.  Again he seemed oblivious of my attempts to calm him, until I shouted again.  That stopped him, but he stood there quivering.  We quickly finished with his front feet and ended the session.  All of us were shaken by this behavior from the horse who was typically Mr. Cool.

Since that day there have been a couple of other inexplicable panic attacks.  Usually short in duration, but always a disturbing experience.  There is a quality to these attacks that is more than just a spook.  He seems not himself, and only half aware in those moments.  In between those times he seems fine enough, though his personality has also undergone an odd change.  Mr. Cool and Aloof has gotten much more cuddly and affectionate.  Never vocal before, he’s begun talking to us.  Never liking his head touched, he now enjoys a face rub.  Enjoyable as this change of personality may be, it’s an odd development after twelve years of living with him.

So, I have a twenty two year old horse who is more fit and physically sound that horses half his age.  But he cannot live outside, he cannot have a working life, and he’s now having inexplicable panic attacks.  My vet, usually optimistic and ready with answers, has no encouragement to offer.  She has seen several cases like this before, and they all worsened over time.  In the three cases where a necropsy was performed post-mortem there was a growth found on the brain.  Could that be Nash’s problem?  We can’t know.  But I do know that he has to be able to enjoy his life, or it’s no life at all.  So, we will continue to do our best while we search for some answer to the Nash dilemma.

Be good to your horses.

2 thoughts on “The Nash Dilemma”