Noble has found a way to put amusement into the dull morning routine – though I daresay that my mother finds it slightly less amusing than does my chestnut juvenile delinquent!

With the onset of warmer weather, fly season is in full swing.  With fly season comes the fly mask.  Our horses have always been pretty quick to learn that the fly mask provides relief from the pesky little crawlers, and most are very accommodating in presenting their heads for masking.  All, that is, except our youngest equine.

In the morning, my mother does her rounds, masking each horse and offering a treat in thanks for their cooperation.  When my mother reaches Noble’s stall, he too offers his head – that is, until the fly mask is raised.  He has no problem playing with the fly mask, but when it is raised in the direction of his ears, he calmly backs up.  At the lowering of the mask, he comes forward again.  Raised … back up.  Lowered … come forward.  And on it continues.

My mom has tried it all – patience, distraction, deception, bribery.  If anything does work once, it only works once.  She even put on his halter, which he happily received, and she was able to easily place the mask.  But, having fallen for that deception once, he will no longer allow her to halter him unless she opens the gate first – allowing for the potential that she might take him out.  I wonder how long he’ll keep falling for that? 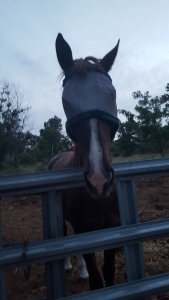 Noble wearing the mask of contention!

Of course, this all sounds either like a horse who is afraid of the mask, or is just ill mannered.  So, why do I think this is a game?  Simple!  For each day that I am home, since this all began, he calmly offers his head to me and waits patiently while I get the mask settled and fastened.  In fact, on one of the early occasions when my mother could not get the mask on, I happened to pass through the barn on my way to work.  She’d already tried several times, to no avail.  I walked over, picked up the mask, and easily placed it on his head!

It is hard not to be amused, and a little proud, of the fact that he easily lets me do something he will not let my mother do.  But it confirms what I have suspected for a while now – he has become a “one woman” horse.  I was first suspicious when he was apparently mouthy and biting the farrier and his assistant, in my absence.  He is no longer mouthy with me, and only very rarely with my mother.  We have since had other visitors – and he has been very mouthy with all.  With this latest little episode, it’s clear that he has learned manners only for me.

So, I will be on a mission to have others handle the young punk more often.  Horses are very contextual learners, and clearly Noble’s context for just about everything involves me.  As flattering as it is, he needs to generalize his manners in order to be a good equine citizen.  Still, I won’t guarantee against the occasional chuckle at this new game he has invented!

This entry was posted in My Journey and tagged brat, fly mask, horse behavior, Noble. Bookmark the permalink.