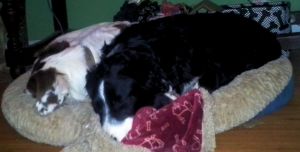 We interrupt this usually horsey-oriented blog for a slight doggie detour.  Our household includes two dogs: Macie, a nearly 8 year old Brittany, and Kenzie, a 17 month old Border Collie mix who is still very much a puppy.  It’s been about a year since Kenzie joined our family.  We found her at a Border Collie rescue – obviously someone’s pup at one time, but found scrounging for food in alley trash cans.  When she came she was extremely insecure, with a tendency to widdle at even a hint that someone might be upset with her.  In the year since, she’s gained self-confidence and has become quite the character.  The dogs get along famously, but on a recent day working from home I managed to catch some pictures about a particular scenario that plays out nearly daily. 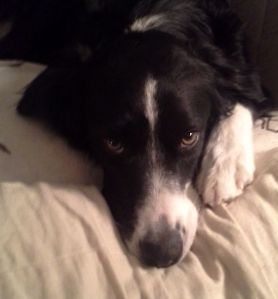 Have you ever encountered one of those kids who thinks every toy in the playroom is theirs?  They may be happily playing with the best toy around, but let another kid pick up any other toy … suddenly that’s the best toy in the place!  Well, that is Kenzie!  It doesn’t matter if the toy she has is identical to the toy Macie has – Macie’s toy is always better.  Macie is pretty laid back, so sometimes she’ll let Kenzie have the toy, and pick up the one Kenzie originally had … and that toy suddenly becomes the only toy worth playing with!

In the beginning, there were some resource guarding issues – a bit of snapping and snarling from Kenzie.  But we’ve gotten past that now.  Instead, Kenzie has settled on the following strategy.

The first part of the strategy is to watch over Macie as she plays with the toy – or, in this case, chews on the bone.  Never mind that just to the right of this photo is a dog bed with an identical bone! 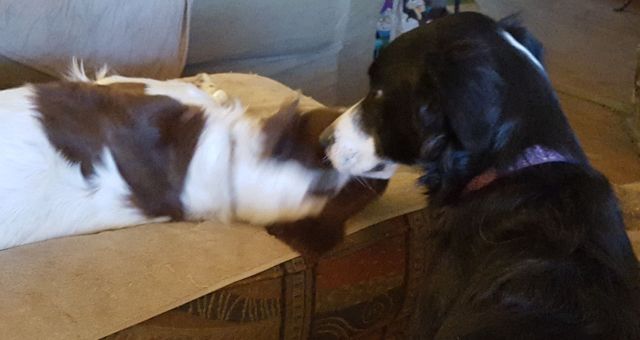 Macie takes a slight break from chewing, so it’s time to start to maneuver into position.  Kenzie’s move from her previous position to this was very cautious – as if stalking prey.  (Note that the knob of the bone can be seen near Macie’s front paw … target in sight!)

Macie got a second wind, and was again chewing on the bone when Kenzie made it back around to the other side.  Now, here is where I lost the chance for the one photo I wanted.  In the next moment, Macie again tired of the bone.  Unfortunately, when she did, it fell to the ground so the scenario didn’t play out quite as usual.

Typically, once Macie lays the bone down, the Border Collie part of Kenzie gets into gear.  She moves slowly and stealthily, eyes on Macie the whole time (who, by now, could care less!) … closer … closer … touch the bone with the nose.

Check for a reaction.

The teeth close slowly around the bone, still checking for a response.

She then slowly, inch by inch, retracts her head, bone firmly clenched, eyes still awaiting the wrath of Macie (no such thing!).  Her performance is worthy of the best sneak thieves in any Hollywood crime drama!

Her ill-gotten gain now in … er … mouth, Kenzie settles down to enjoy it. 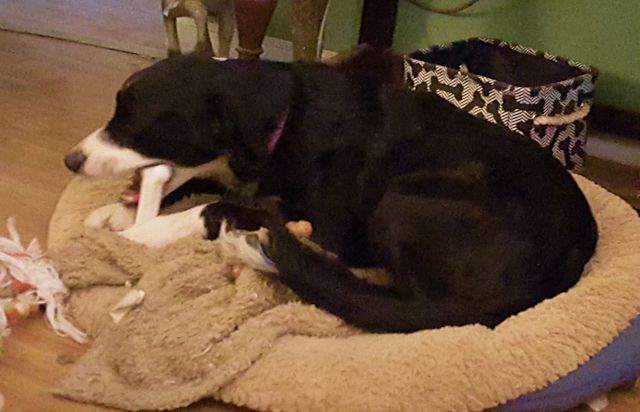 Notice the knobs of the other, perfectly good, bone sticking up behind the tip of her tail?  Yeah, it was there all along!  But, she was not quite satisfied … in the next moment, Macie decided to go nap on her favorite chair, so … 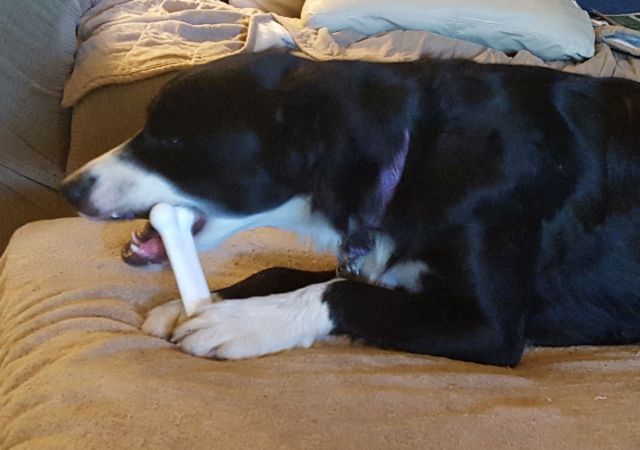 Kenzie took over Macie’s place on the ottoman.

I remember, just six years ago, attending a talk by a very well respected behavioral scientist and dog trainer.  The speaker talked about the dangers of attributing human emotional or motivational terms to dog behavior.  Guilt, for example, is something she said dogs did not feel.  On this I disagree – I’ve seen too many animal behaviors that exactly mimic human equivalents, and I think it discredits them to over simplify their motivations.  Kenzie clearly covets whatever Macie has … just like the little kid who doesn’t know how to share!

Fortunately, Macie is the tolerant older sister – she knows how to get what she needs, like the best napping spot in the house!

If you are in the United States, have a lovely Thanksgiving … whatever your plans.  Everyone else, just have a lovely November 26th!

This entry was posted in Just For Fun and tagged behavior, coveting, dogs, greed, jealousy, Kenzie, Macie. Bookmark the permalink.