The most serious problem dressage has is that the judging isn’t done strictly according to the FEI rules anymore. For me 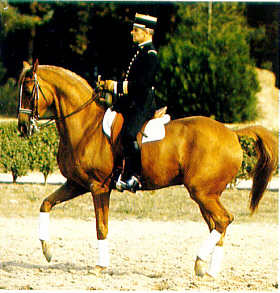 the judging has come to the end of the road by leaving the official scale and it will be interesting … to see how this will evolve in the future. For example there is the general tendency to place horses with exceptional paces higher than less spectacular but better ridden ones. This puts dressage in general in danger, not only at the highest levels. There is a gap between what is actually happening in dressage and the FEI rules and this is the point which should be discussed. The future of dressage strongly depends on how riders are judged as well as on how the eye of spectators is formed by what is presented wrongly but scored highly.

This entry was posted in Classical Training and Philosophy and tagged Colonel Christian Carde, FEI rules, gap between judging and rules, judging, the future of Dressage. Bookmark the permalink.