Attack of the little people!

It seemed like a good plan.  The weather and footing were cooperating, so it seemed the perfect time to drag the jump poles out and have a day of ground pole gymnastics.  The boys certainly enjoyed themselves; but Tally’s session was interrupted by the emergence of the neighbor’s grandchildren.  Focusing on poles just isn’t possible when the squeaky shrunken humans are in the area! 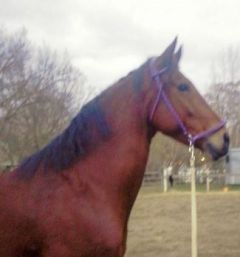 Tally riveted at the sight of the small children in the field next door – clearly more fascinating than me and my poles!

moment she heard the little voices and squeals coming from our neighbor’s property, I knew I would be lucky to have half of her attention.  And, when they came into view and decided to take a stroll across the field that abuts our arena … well, we weren’t getting any work done then!

Tally, like Dani before her, is highly attentive to all sounds and new sights around her.  With Dani, I learned that it did not pay to fight about it – on days when something was particularly riveting, I would find some small tasks that we could manage and call it a day.  As our communication improved, so did my ability to regain her attention in those situations.  I am using the same approach with Tally, and I find that it’s working overall.  It will take us longer to achieve anything notable – but it’s building a relationship and trust that I treasure.

Since the aim today was really to have fun, I was game to accommodate her obsession with the small humans.  Besides, she’s quite beautiful when she’s on high alert, and I just like looking at her!

As the mother and children lingered in the field, exploring the farther end, Tally’s attention on them began to wane and we managed a few rounds of poles.  However, as they came back across the field and made a point of coming close to the arena, just to see the horsey … she was once again on high alert.  I heard the mother say that the children were afraid of the horse, and I replied that the horse wasn’t too sure about them either!  She asked if they could go and get an apple for the horse.  Of course!  Maybe associating small people with yummy treats would cure Tally of her phobia.

As they retreated to the house, to fetch the apple, Tally’s attention returned to me and we were able to have some fun with poles.  When they returned, she approached them cautiously.  The mother, holding the youngest in one arm, held out an apple with the other.  The other child, meanwhile, watched from behind his mother’s legs.  I would put their ages at about 18 months and not quite 4 years … though I am better at aging horses than children.  As Tally reached for the apple, I told the toddler that the horse was as afraid of him as he was of her.  This seemed to help some, as he stepped out from behind his mother, but remained well back.

As Tally munched the apple, the mother was stroking her face.  We both asked the toddler if he would like to pet the horse, and he tentatively reached out just as Tally lowered her nose in his direction.  One pet, and the hand was retracted.  But this seemed to give him additional nerve, and he stepped forward when his mother invited him.  In the next moment, Tally showed just what a gentle soul she really is.

The boy was now standing beside, and just slightly ahead of his mother.  Tally, having finished with her apple, decided it was time to figure out this small being.  She reached her long neck over and down, placing her nose just next to his cheek.  The boy turned his head slightly away, and tucked his chin to his chest.  I could hardly blame him, as her head was nearly as large as he!  But she remained perfectly still, and softly breathed on his cheek – four warm, deep, soft breaths.

I was worried this may have scared the boy, as I could not see his face.  To try to cheer him, as Tally blew her last breath on him and slowly lifted her head again, I asked him if it tickled.  He turned his face back toward me … and it was beaming!  If you ever doubt that there is magic in a horse’s breath, you need only look into the eyes of a child who has felt it!

He was still smiling when they turned to leave.  And I stood there with a new appreciation for just how gentle my big, hot, reactive girl can be!

This entry was posted in My Journey and tagged children, getting acquainted, horse breath, Tally. Bookmark the permalink.

2 Responses to Attack of the little people!