Not bad for an old lady! 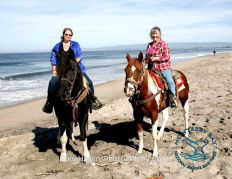 Mom and me, last year, on her 75th birthday

That is a phrase that my mother has been using for years. Whether it’s hauling a fifty pound bag of feed, cleaning three stalls in a morning, or performing a shoulder-in on my old appy – it’s “not bad for an old lady!” Truth is, most of it is not bad for someone half her age, which is now 76, as today is her birthday!

My mother rode some as a girl, galloping bareback around the Horse Heaven Hills (yes, there really is a place by that name, up in Washington state) … and occasionally getting bucked off. She took up riding again in her thirties, after my father left. At first we rented horses for trail rides, eventually taking the plunge into lessons. At this point all her riding had been Western – but someone, one day, offered her a ride in an English saddle and she fell in love! We both volunteered at the campus equestrian center, in order to pay for rides and lessons. When we could finally afford my first horse, my mom put away her boots and put all her support into my riding.

In her late forties she began riding again, occasionally hopping on my Appy show horse, Ben, or hacking down the trail on my 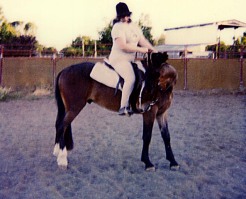 Mom’s first ride on her mustang, Ricky – breaking her first horse at age 53!

Thoroughbred mare, B.J. For her fiftieth birthday I adopted a yearling mustang as a present – so she set about taming, training and eventually breaking her own horse. She was the first one on his back … and she was the one who hit the fence when he bolted the first time he was approached by a horse with rider. But, she was undeterred. She even taught the little bugger to jump – with a bit of help, of course.

She’d fallen in love with the sport of Dressage and, as time went on, found less interest in the jumping. So we sent the Mustang off to be a pony club horse, and I gave her Ben to ride. He was now a seasoned Dressage school master, and ready to retire from jumping himself. Then in her late fifties, my mom learned how to ride half-pass, canter pirouettes and flying changes.

At fifty nine, I talked her into participating as a demo rider in a Dressage biomechanics clinic. Terrified that she would make a fool of herself, she was luckily paired with a rider we knew well, and out she went to be a guinea pig. It was late in the day, so the lecturer was at the point of asking the audience what the weaknesses were for each rider. When he got to my mom, there was silence and lots of shrugging shoulders. “That’s right,” he said, “there is nothing that I would change about this rider. Her position is as good as it gets.” My mother’s expression went from “braced for the worst” to pure shock!

Her riding partner for that session told us, the next morning, that my mother had been the topic of dinner conversation – the clinicians were very impressed at what a natural rider she was (they knew her as my mother, but had never seen her ride before this). “Oh, I am not a natural rider,” my mother replied, “I just have a very good teacher!” It’s true that there had been much sweat and tears leading up to that day … but she had earned every bit of the praise she got.

Our riding has been off and on in recent years, but she has enjoyed many good rides on our various horses. Last year she was in a wreck on her Dutch

Warmblood gelding that landed her in intensive care overnight. The next day she laughed at the doctor when he made the recommendation that she never get on a horse again. When she realized he was serious, she got mad. She was on my Nash, cooling him out for me, a week later!

She has had a number of horses to ride over the past several years. But, with the exception of the Mustang, they have all been “hand me downs”. Now she has Coffee, the “pony” she always wanted as a kid.  He’s sweet, kind … a little bit of a punk … and the apple of her eye! He still has a lot to learn, but she’s enjoying the journey with him. She gets rides on my Nash as well, to get her feel back and practice the fun stuff that Coffee hasn’t learned yet. In a couple of years she and Nash will be able to try for the Century Club – qualification is a horse and rider combination whose age totals one hundred years or more rides a Dressage test in competition. A fun goal to shoot for … but she gets her greatest joy from the beasts themselves … and that’s “not bad for an old lady”!

This entry was posted in My Journey and tagged Coffee, my horse crazy mother, riding in midlife and beyond. Bookmark the permalink.