In a previous post, I talked about Nash’s recent return to work after a long layoff.  Early in 2013, under circumstances we can only

speculate upon, Nash separated his pelvic synthesis – the cartilaginous attachment of the two sides of the pelvis.  Long term prognosis was good, but it meant several months of stall rest.  Unfortunately, this was followed by a run of rotating hoof abscesses.  His layoff ultimately lasted more than a year.  In the decade that Nash has been with us, we’ve had a few periods of inactivity that have lasted that long, or very nearly.  Each time, once he gets fit again, we pick up where we left off  – in this way we’ve hopscotched our way to schooling Third level or above.  The last time we started up again was two months before his injury – he was strong, supple and through.  It felt great! That glorious month was a big part of my renewed motivation – so I was really looking forward to reviving our partnership this year.  But I am convinced that he’s campaigning for permanent retirement!

As I related in the earlier post, my initial attempt at climbing back in the saddle was derailed by a bout of high spirits.  I was also aware of some back tenderness at the time, so I set about giving him even more time to get fit.  As I’ve seen him getting looser in his lunge work, I targeted this weekend for renewing the mounted work.  And so it was with great anticipation that I climbed up into the saddle this morning.  We walked four strides from the mounting block when he suddenly stopped and reared, and then reared even higher!  In the decade that I’ve worked with this horse, he has never reared – under saddle or loose.

Of course I know the reaction of most of my riding friends – this is the point at which you wallop him, right?  I’ve had these conversations, about their own horses’ behavior, enough to know that’s how most would have reacted.  For better or worse, that was not my reaction.  Instead, I just sat there, astonished at this highly unusual behavior.  Why was my always well behaved Appaloosa gelding suddenly being such a bad actor?

And so the detective work begins.  Is it a training issue?  He’s never done more than a slight frolic, when feeling in a particularly 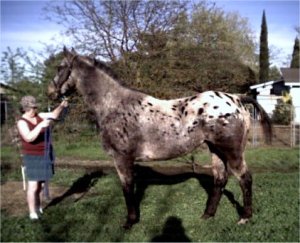 Nash and my mother, on his first day here

spry mood.  The month of riding we enjoyed, before his injury, came after a nearly two year hiatus – not once did he offer even a surly head shake!  However, we have noticed several behavioral changes this year, beginning with a new habit of tearing away from us and going on a rampage.  The first time was a genuine spook that caught my mother off-guard while she was hand-walking him.  Unfortunately, he seems to have learned too well from that one experience, and we’ve been struggling to break this habit.  He has also exhibited far more rambunctious behavior – bucking on the longe line, and prancing out to the turnouts – than we have ever seen before.  Is he just feeling better than ever?  Or has he decided that the leisure life is the right life for him?

Or is it a pain issue?  Although he has been particularly rambunctious, he has shown more back tenderness than in the past.  At 20, he’s lost some of the back muscle bulk he once had.  I have also noticed a slight protectiveness in his haunches when out playing.  Perhaps his back is tight from the layoff?  Or perhaps there are unseen repercussions of the fracture?

I have far more questions than answers at this point.  My disappointment at having to back off of riding for a little longer is

Nash in a more peaceful mood

superseded only by my frustration at not knowing the cause of his perplexing behaviors.  Perhaps I am over complicating the situation, but my experience tells me that pain has to be ruled out before you can tackle it as purely behavioral.  So, I will be getting him examined, and perhaps have a visit from a chiropractor, to rule out any potential pain issues.  In the meantime, we will go back to the basics with training and discipline, in an attempt to get him focused again.

I ended this morning’s session with a walk around the back, in hand, practicing stopping, backing and standing.  The horse I returned with was calmer and more focused on me – but by this evening we started back with the “I don’t hear you!” attitude.  So, I will plug away, in the hopes that I regain my partner, once again healthy and happy to dance with me.  I will keep you posted on our progress.

This entry was posted in My Journey and tagged behavior issues, Nash. Bookmark the permalink.