A Tale of Two Fly Masks

It’s been the same story every year.  The flies come out.  Coffee and Tally do the Cha-Cha when the fly spray touches their sensitive hides.  And Noble remembers that he’s much taller than we are, when it’s time to wear his fly mask.  Last year, in an effort to mitigate the challenges with Noble’s ‘coyness’ about his fly mask, I worked on a visual cue for him to lower his head.  It seemed to have done the trick last year, as he would politely lower his head so even my mom could get his mask over his ears.  However, this year he developed selective amnesia!

At the very first sight of the fly mask, this year, Noble casually lifted his head out of my reach.  No amount of cuing, coaxing, or cajoling would get him to bring his head any lower.  It took two sessions before I could get it close enough to an ear to get it hooked over.  As soon as it landed on his ear, his head came down low enough for me to get it settled on.  I hoped that, as in past years, it would get easier from there.  But the next day he was on to me, and made it even more difficult – finally turning his back on me and walking away. 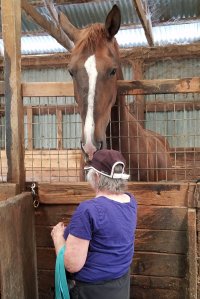 Noble and my mom – just a slight size difference

I was at the office the day my mother had enough of his games.  She tried to get his halter on, but he was having none of it.  She managed to get the rope around his neck.  He made several attempts to get away.  As enormous as he is, it’s amazing that my mother was able to keep a hold of him.  That seemed enough for him to give up and accept the fly mask.  Maybe we had the secret, now.  But the next day he avoided her getting a rope on him!

My mother, fed up with his games, got out the step stool.  Noble, surprised by a human up at such a high level, eventually was masked.  But, the next day, when I tried it, he was on to us.  This time it took stool, rope, and a bribe in order to be successful.

I began to get very frustrated that my otherwise improving and maturing gelding seemed to be choosing a fight over something he has generally accepted for the better part of each year of his life.  I started to puzzle over what could be going on.  Was he choosing this as the way to assert his power?  I’m not typically inclined to believe that as a motivation in horses – but his past behavior does lend itself to that narrative.  But why now, when he’s been more malleable and cooperative, overall?  It was puzzling.

I started to ponder anything that was different this year, from last.  Other than his attitude, which is generally more positive, the only thing I could land on was the fly mask itself.  This was not a new fly mask; we’ve had it for a couple of years.  But it’s typically the back-up, as I don’t like the way the forelock slot sits.  We hadn’t washed the masks at the end of last season, so this was the only clean one that fit his enormous head.  I began to think over his behavior, and one unusual thing stuck out – he’d spent a lot of time sniffing over the mask, during each attempt to put it on him.  I remembered that this mask was supposed to have a fly repellent embedded in the mesh.  Could his problem be the mask itself?

When the other masks were clean, my mother took the ‘usual’ mask out to use.  It took the full effort of stool, rope, bribe to finally get it on his ear, and then on his head.  At that moment, she realized that it was inside out.  Dreading what might happen, but knowing it couldn’t work that way, she removed the mask, turned it around, and attempted to put it back on.  Noble lowered his head and let her put it on!

Noble in the fly mask he clearly prefers

Could it have been as simple as a different mask?  The next day, he lowered his head for his mask.  And the day after that.  And every day since. Problem solved!

How often do we take our horses’ actions personally, or label them as ‘acting out’, ‘asserting dominance’, or ‘being difficult’?  How often do we see riders get angry at, or even personally insulted by, their horse’s behavior?  We claim to be the more intelligent species.  We owe it to our horses to apply our brains, rather than our emotions, in reacting to behavior that we don’t like or find difficult.  They do their best to communicate their thoughts and feelings – we owe it to them to try to understand what they’re saying.

6 Responses to A Tale of Two Fly Masks