A blast from the past

At times when I need a reminder of how beautiful Dressage can be, I look primarily to my library.  No book cheers me more than The World of Dressage, by Neil ffrench Blake.  I stumbled upon this book at a thrift store, twenty years ago, and a better dollar was never spent!  Published in 1969, it is filled with black and white photos of top riders of the era, from all of the Olympic disciplines.  It is a beautiful tribute to a time when tack was simple and the horse was paramount.  Most fun of all is that the author freely makes comparisons and criticisms, in the name of educating the reader.  As I recently leafed through the book, I decided to share some of my favorite photos and commentary.

One of my favorite things about this book is that the photo captions always list the horse first.  In some captions, the horse’s name is followed by the rider and country, and sometimes just the country.  This is a consistent and clear choice by the author, and I love how it places the emphasis where I believe most of those riders would have wanted it.  So, in that spirit, I will caption the photos just as the author did.

Another somewhat unique aspect of this book is the fact that many of the photos are of the riders schooling or in casual moments, rather than in formal competition.  The author, who is also the photographer, explains this:

“A few minutes in a dressage arena watched by a small party of highly critical judges, can represent many thousands of hours of hard work.  The observer can often gain a greater insight into the principles of horsemanship by watching experts in training, as opposed to actually performing (which is why so many photographs in this book were taken while riders were practising).

I could not agree more!  I have learned far more by watching the warm-up arena (and lessons) than by watching competition rides.

The book is filled with comments on good and bad riding, as illustrated by the photos.  Remember, the photos in this book are all of top riders in their fields – Dressage, jumping, and Eventing.  I would challenge you to find any modern publication that is willing to criticize famous successful riders.  Yet, in the day when this book was published, egos were less fragile, and criticism was an accepted part of being a rider.  Here is one of my favorite comparisons of good and bad training: 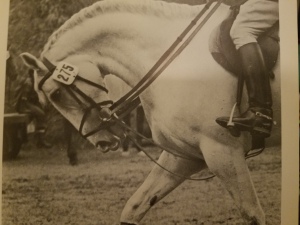 “I have already referred several times to the important and basic principle that collection must be achieved correctly and without the use of force.  There are various ways of achieving artificial collection, and one of them is illustrated on the right. One can only say that no good is likely to come out of this sort of use of running reins — the only visible effect is liable to be the development of the ‘broken neck’ (see page 38).  In any case, even if running reins were used occasionally in training, the horse should never be allowed — let alone forced — to become overbent.”

The horse above, a jumper, is ridden by a member of a highly successful jumping dynasty – yet the author is clearly open with his criticism.  This style of riding would later emerge in the Dressage world, and sadly persists to this day – even without the use of running (draw) reins.  The negative effects of such riding, alluded to in the passage, are many and well documented.  The author goes on to offer the following comparison:

“A different attitude is revealed (left) with Pepel undergoing some early morning schooling.  Elena Petouchkova, while forcing her horse to use himself by making a series of tight voltes, has dropped her curb rein completely.  The effect is as though she were riding in a snaffle only.  This is not unique, or even particularly important; but these two pictures effectively illustrate the difference between two totally opposed attitudes.”

He clearly likes this latter pair, as they seem to be featured more than any other horse/rider combination.  The photos of Pepel and Elena seem to always embody the lightness and balance, in both horse and rider, that is the ultimate goal of Dressage.  The author uses them as good examples several times, as with this next passage.

Good and bad development of the horse

The book is clearly intended as an overview of dressage, both as a sport and as training for all sports, yet he covers topics I find all too rare in modern “how to” detailed training texts.  Among these is the effect of good and bad training on the physique of the horse.  This example will seem unfair to some, as it compares an Event horse (Gladstone, ridden by Mark Phelps) to a top Dressage horse (Pepel again) – but the lesson in the comparison is an important one: 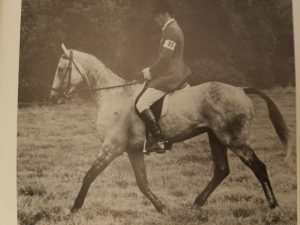 Gladstone is another horse that shows in these pictures defects in his training.  The most obvious and interesting point about him is that he is a striking example of a horse with what dressage experts call a ‘broken neck.’  In a correctly trained horse, the principal bend in the neck will come at the poll, with only a gentle curve from there to the withers (see, for instance, Pepel on page 34).  The ‘broken neck’ indicates that Gladstone’s schooling has been too hurried, and an attempt has been made to force his head into the correct position.  To lower a horse’s head correctly, much time must be given to the development of the muscles along his spine from his poll to his croup. If any attempt is made to force the process of development the result will be that the correct muscles will never appear, and the horse, in and out of the dressage arena, will be an uncomfortable and unsmooth ride.”

It is the “angle” that appears about one third of the way down Gladstone’s neck that the author is referring to as ‘broken neck’ (also said to be ‘broken’ at the third or fourth vertebrae).  His description of what causes it is quite accurate, although in this picture the horse is nicely up and open in his carriage (however, there is a feeling of retraction, rather than reaching, with the neck).  Still, the benefit of proper development can be clearly seen in the example of Pepel that he refers to above (seen here at left).  Note the more even arc to the neck.

To be fair, Gladstone appears to be a Thoroughbred – the favorite mount of (particularly U.S.) Eventing riders of the day.  Likely he was raced in his early life, and I have seen horses come off the track with that area of their neck over developed.  Although improvable, it is nearly impossible to reverse such damage.  Still, it is an affliction seen all too frequently in the Dressage world, today, where necks such as Pepel’s are all but unseen – even on the top horses in the world.

That is what I love about this book – it is a catalog of lovely images from a time when you could find light, lovely riding done in partnership.  Development of horse and rider took time, and the results reflected that.  Take the picture of Pepel, above – he is actually executing a rein back in that photo.  When was the last time that you saw a rein back done, in a Dressage arena, with such lightness of rein, and such regular steps?

I will try to share other gems from this book, in future posts; but, for now, I want to leave you with my favorite photo from it.

When have you last seen such an array of relaxed, yet attentive, horses standing in such close proximity?  Reins are held lightly.  Eyes are all soft.  There is both peace and readiness in this photo.  This, for me, is what Dressage horses should look like – not the overly sweaty, overly tense, often stressed out horses that we see all too often today.

6 Responses to A blast from the past