Why would they deal with us? 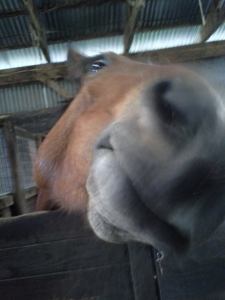 If horses had friends and food at their disposal, why would they want to have anything to do with us?  This is a question I see frequently posed; or, more frequently, something asserted in the positive.  I find it an odd question.  Perhaps it is because I have never heard it posed in relation to dogs.  What is it that makes a horse more likely to shun us than a dog?  Neither is of our species and, so the argument goes, would prefer the company of their own in a life human-free.  Perhaps my hesitation in accepting the premise also comes from the relationships I have had with horses throughout my life.

It is no doubt that the history of the horse-human relationship too often favors the human at the expense of the horse.  We have certainly used them for our own ends, and not always with kindness or gratitude.  However, it is equally true that we have selectively bred them for millennia.  Whatever purpose a horse was bred for, an innate tendency toward compliance and friendliness would have been an asset.  Who wants to struggle with a horse who would rather not be around when your life or livelihood may depend upon that horse?

One of the tame Russian foxes, showing the color changes that came with domestication.

The same holds true of the domestication of the dog.  Friendlier members of the wild packs, perhaps raised from pups, were bred to create a friendlier, more domesticated companion.  In 1959, Russian scientist Dmitry Belyayev set out to prove how quickly this could work by selectively breeding the fox for docility.  In the blink of an eye, in evolutionary terms, a domestic fox was created – breeding purely for temperament.  (If you are not familiar with this experiment, you should read about it.  Along with the change in domesticity came some unexpected physiological changes.  Fascinating stuff.)

If you are willing to accept that we have greatly molded the horse and the dog into domestic companions (and believe me, there are many who won’t accept that), then why an assumption that horses would more willingly ignore us?  I cannot answer directly, as I do not have that assumption.  However, I believe the root may be in the fact that dogs share our homes.  Although there have been eras and cultures in which horses also shared our dwellings, that is not something commonly practiced today.  However, in cultures that have domestic dogs, some or all of the population has a dog in their home.  It just seems more natural to assume that a being who eats our food and sleeps in our rooms (if not in our beds) has made more of a conscious choice to stay with us. 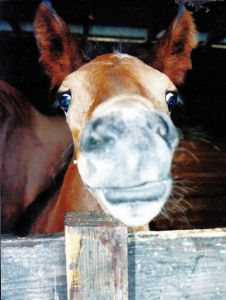 Even on her first day of life, Tally wanted attention from her human family members.

Yet, my personal life with horses has shown that they, too, can make a conscious choice to spend time with us.  First, I have owned and worked with horses who lived in a group situation – yet they would leave the group to greet me when I walked through the gate.  Ben lived next to a mare he had a clear bond with – yet the entire barn always knew when I arrived.  When he was turned out, I could call his name and he’d come galloping.

Not only have I experienced horses bonding with people, but I have watched horses choose one person over another.  To me there is no clearer evidence that horses make a conscious choice to bond with us than to have them show a specific preference for one person over another.  Of course, the standard answer is “it must be the carrots”.  Yet, I once had a client’s horse who bonded with me – vocalizing to me, and showing clear affection behavior – yet, in those days I rarely fed treats, while her owner fed her non-stop carrots on each visit.

I have also experienced horses who enjoyed their jobs – though, admittedly, it seems a rare thing these days.  I’ve watched team roping horses who ran to the cow, reins on their necks, veering as the cow did – clearly focused, calm, and enjoying the job.  I raised a mare who learned to love Dressage so much that she would play using the movements she’d learned – skills she’d never shown growing up.  I’ve had three horses who would jump on their own, just for fun.  Given the chance, and a rider who listens enough to find the right activity, why is it so far fetched to imagine that a horse might actually enjoy the interaction?

Tonight I walked through the dark barn, having fed the horses, and noticed Noble was ignoring his hay.  He stood at the front of his stall, watching me move around the barn.  I gave him a scratch and moved on – but he continued to watch me.  So, I grabbed a handful of carrots and went over for some “target” practice.  (Due to his massive size, I’m teaching him things like putting his poll or forehead under my out stretched hand.)  My mother was just through the door, preparing the grain – but he had no interest in that.  His paddock was wide open to the back – but he preferred to stay near me. 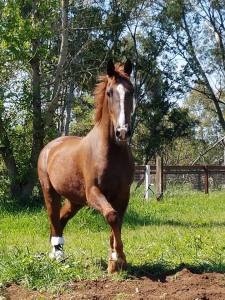 Do I fully understand why he chooses to bother with me?  No.  But I know that he has food, friends, and freedom (within the confines of our small property), yet he increasingly seems to crave my attention.  Clearly there is something a human can offer a horse that makes the relationship valuable to them.  At the risk of being accused of anthropomorphizing, I’m going to say the simple answer is “friendship”.

There is increasing evidence of interspecies friendships – so why should that not include humans?  But good friendships take work – you have to listen, and sometimes you have to hear things that aren’t comfortable.  This is no less true for our animal companions than for your human friends.  You get out of it only what you put into it.  I hope that people like the woman who posed the question that inspired this post will eventually learn why horses might actually want to have anything to do with us.

2 Responses to Why would they deal with us?