Ironically, the day after publishing a remembrance of Dani, on the sixth anniversary of her death, her brother Java died suddenly.  For further irony, Java left us at 25 – the same age his sister was when she passed on.  We knew the end was coming soon, for Java, and were planning on making that final appointment – but fate took the decision out of our hands.  Java’s exit from this world was sadly no easier than his entrance.

As with Dani, Java’s life began because I fell in love with a stallion.  This time it was my Dressage instructor’s champion Grand Prix stallion.  I had always loved his look and movement, but was not planning on doing any more breeding – until the day I got to ride him!  He was a massive 16.3 hands high, and the moment I settled into the saddle, I knew this horse could kill me if he wanted.  Yet he was softly responsive, and his gaits made you feel like you never actually touched ground!  By then we’d purchased Dani’s mother, having fallen in love with her when leasing her to produce Dani.  So, a breeding was arranged.

It was not a normal pregnancy, in that we didn’t believe she’d actually gotten in foal.  It was six months into the pregnancy, when she became a hard keeper that our vet came out and discovered she was in fact in foal.  No worries – we began feeding her for pregnancy, and she picked right up.  Then, one month before she was due, she went down and didn’t get up.  That night, when I arrived at the barn, a couple of people told me she’d been down all day … in the warm sun, never moving.  Not a soul thought it might be worth calling and letting me know!

By the time we got to her, she was as dehydrated as I imagine you can get without dying.  Not a single mucous membrane was even a little moist, and you could pull the skin on her neck as far as you could, and it stuck there!  I’ll spare you the hour long drama of trying to get a vet to come out to look at her.  (Maybe some day I’ll write that story, as a cautionary tale about lazy veterinarians.)  In the end, we got someone to come, and the vet immediately asked if we could haul the mare to our local vet school (being after hours, I needed her referral to get in).  Off we went.

They got fluids in the mare, and observed her for a few hours, before determining that surgery was the only option.  They gave her a 75% chance of survival – but only a 50% chance of carrying the foal to term.  What can you do but try?!  So, we waited up the rest of the night, waiting for a call to let us know how the surgery went.  Perhaps the longest night of my life!

It turned out that she had trapped her colon between her uterus and spine, probably when rolling from a mild colic.  They managed to put everything back into place, and both mare and fetus had survived.  But that did not ensure the future for either – we were far from out of the woods.

No horse has ever been happier to see a trailer than our mare was the day we picked her up!  She didn’t even wait for me to point her at the back before she was squeezing her big belly in!  Our orders were complete stall rest until she foaled – not even walking far enough for grass.  She had a sizable incision up her midline, and all that was keeping her belly from rupturing under the weight of the foal was a line of staples and a huge bandage around her barrel.  If she could hold out for at least a month, they felt her odds would increase – but any sooner and her risk of rupture was high.

One month, to the day, after her surgery and her water broke in the middle of the night.  We were camping out in my van, taking turns on watch, knowing we had to be present for this birth.  We watched as she lay down, and … nothing.  She just lay there, completely still.  I waited for a good while to see if contractions would start, but she just continued to lay there still.  When I felt I could wait no longer, without risking both of them, I went in to help.

I found the foal’s feet just where they should be, and took a hold.  If I applied gentle pressure, the mare would give a little push – but it was clear that she lacked any strength in her abdomen.  I’ve assisted with births, including Dani’s – but it was always just to guide or give a little support.  I’m not sure I’ve ever labored harder than laying on my belly, in the straw, pulling out that foal inch by inch!  They say that once you get the shoulders out, the rest comes out with a swish.  Wouldn’t you know that my colt would be born with a giant butt on him!  Once I got him out as far as the hocks, I finally took a breath. 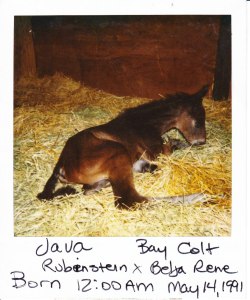 Java in his first hours of life.

I sat there in the muck, clearing the mucous from his face, making sure he was breathing, wondering if his mother would be able to get up.  At least I knew I had a live foal, and was counting myself lucky, when a voice from behind said, in a disappointed tone: “Oh … he has a roman nose …”  Gee, thanks mom!  “Hey, he’s alive!” was my reply.

His mother did get up, and neither seemed any the worse for their surgery and the birth.  I did wonder, throughout Java’s life, if the anesthesia his mother went under had any affect on him.  There was always something “not quite right” about Java.  For example, as a foal, he would carry rocks around while shaking his head.  I gave him some traffic cones, feeling they’d be better on his teeth – and he used to beat himself in the head with the heavy base, until it left marks.  He was the slowest learner of any horse I’ve ever worked with – every day was “Groundhog Day” with Java.

Java had the physical talent for Dressage, but not the mind.  He’s probably the one horse I should have sold to someone who had a more suitable job for him; but I felt responsible for him, and he was plagued with health issues his whole life that I didn’t feel others would be as tolerant of.  So, we were stuck together.  As he got older, I paired him up with my mother, which actually was a very good match.  By then he’d learned enough for mom to have fun with – but she was far less demanding than I.  Then came the day that he blew sky high, and trampled her – for no discernible reason.  That was the day he was retired for good.

Noble and Java, this past Spring

When Noble grew big enough to be a match, Java’s job became that of “Uncle” to my boy.  They were a good match for a couple of years – and for that I will forever be grateful to the old man.  Noble has certainly mourned the passing of his “uncle”, calling for him the first day, and seeking comfort from me for a couple of days after.  He has now adjusted, but I do not doubt that he will remember Java and the fun they had.

It is always sad when someone passes – human or animal.  But there is no denying that some hit you harder than others.  Java’s passing did not compare to losing Dani, Ben, or my dog Brita.  But I regretted that we could not have made it more peaceful and humane for him.  However, as dramatic as it was for me, two vets have assured me that it was probably not painful for him.  I can take some comfort in that.

I hope you’ve found your mother and sister over the Rainbow Bridge, old man!

Be good to your horses.